IlliniFaninHoosierLand
Quite a curious story here from the Scottish Premiership:

IlliniFaninHoosierLand
One story I missed from a couple weeks ago was CONCACAF changing the qualifying format for the 2022 World Cup due to the pandemic.

Instead of the hex, they'll do an octagonal final round with 14 matches being played between 8 teams. The "Octagonal" will take place between June 2021 and March 2022 with the top 3 teams automatically going through and the 4th place team going to the inter-confederation playoffs.

With the change in format, the top 5 teams (rather than top 6 which was how it was previously going to be done) in the July 2020 FIFA rankings automatically go through to the final round. The Top 5 teams are Mexico, the U.S., Costa Rica, Jamaica, and Honduras. The remaining teams in CONCACAF will be drawn into six groups of five in a seeded draw. The next six highest ranking teams in CONCACAF (El Salvador, Canada, Curacao, Panama, Haiti, and Trinidad & Tobago) are pre-seeded into Groups A-F. Each team plays every other team in their group once (two home matches, two away matches) with the matches taking place in October and November 2020.

At the end of the first round, the group winners of each of the groups will face each other in home-and-home with the match-ups already determined (Group A vs. Group F; Group B vs. E; Group C vs. Group D) with the matches taking place in March 2021. The three winners of these match-ups then move onto the Octagonal.
#403
Aug 10, 2020

unimaroon
At the risk of being repetitive, Europa and Champions league matches are on CBS All Access and a generous 30 day free trial period is currently available.

Get a month of CBS All Access for free

"As you might expect, signing up for your free month does require a credit card, and after your first month, you'll be billed at the regular rate unless you cancel before the end of Day 30. But that gives you plenty of opportunities for binge-watching in the meantime. This deal expires on Aug. 16 and of course, applies to new subscribers only."
#404
Aug 13, 2020

IlliniSaluki
Here is the announcement press conference that explains the crest, colors etc..

I like it. I'm excited to see what their jerseys look like. I I don't really follow MLS or have a team, but I think I'll try to follow STL. A day game at Busch Stadium, followed by food and beer at BPV, then making the short walk over to the new soccer stadium for a night game would be a fun Saturday.

J
jrichisamazing
I am hoping for a PSG vs Bayern final in the Champions League and a United vs Inter final in the Europa League. Both would be very entertaining. Seeing a Lukaku hat trick against United would be priceless.

unimaroon
These competitions have been very entertaining and I've thankfully gotten to a point as a fan where I can really enjoy them. Coutinho's assist and two goals as a late substitute is the stuff of legend. And Barca pays an additional 5M to LFC if Phillippe is a a CL champion.
#409
Aug 16, 2020

In the Champions League, the semi-finals will be Lyon-Bayern Munich and RB Leipzig-PSG with those matches set to be played Tuesday and Wednesday in Lisbon.

In the Europa League, Sevilla will face the winner of tomorrow's match between Inter Milan and Shakhtar Donetsk with the final set for Friday in Cologne.
#410
Aug 19, 2020

The draw for the CONCACAF qualifiers was held today. Here's how the first round draw broke down (Team at top of each group is seeded team):

The first of the first round matches will be played the first full weekend of October.
#411
Aug 19, 2020

IlliniFaninHoosierLand
The draw to determine the schedule for the Octagonal was held today as well. Here's how it looks for the USMNT: 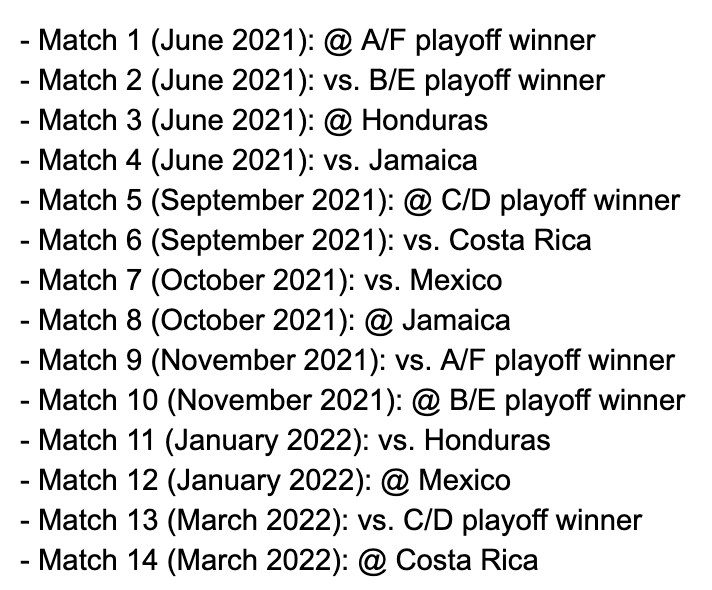 U.S. had better be qualified or at least have a pretty good cushion heading into those last two road matches as the trips to Azteca and San Jose to end the Octagonal will be rough.

Hosting Honduras in January should make for some interesting conditions depending on where they decide to play it.
#412
Aug 25, 2020

Pfannenstiel arrives stateside from Bundesliga side Fortuna Dusseldorf, where he was the club’s sporting director and served on the managing board for the past two seasons. Before then, Pfannenstiel was the head of international relations and scouting at Bundesliga side 1899 Hoffenheim.
Click to expand...

IlliniFaninHoosierLand
Tickets for St. Louis City SC went on sale within the past couple days. They sold 30,000 tickets within the first 15 minutes and 50,000 tickets within 24 hours. No word yet on how many of those sales are season tickets as the new stadium they're building will only hold about 22,500.
#415
Oct 5, 2020

IlliniFaninHoosierLand
Decision Day in MLS today. MLS announced 10 days ago that the final regular season standings and playoff qualification would be determined by points per game rather than by overall points due to teams having played an uneven number of games.

The teams making the playoffs in the West have been decided with today's matches just being used to determine playoff seeding. In the East, things are a little bit murkier as Montreal and Chicago are currently in the final two playoff spots with Atlanta United, Inter Miami, and D.C. United still in contention. Montreal and Chicago control their own fate. Montreal plays at D.C. United while Chicago hosts NYCFC. Atlanta plays at Columbus and Miami hosts Cincinnati.