Joel Goodson said:
Needless to say, huge match tomorrow. We need to take care of business and I expect we will.
Click to expand...

IlliniFaninHoosierLand
Looks like the U.S. will be dealing with less than ideal pitch conditions at Trinidad & Tobago tomorrow night: 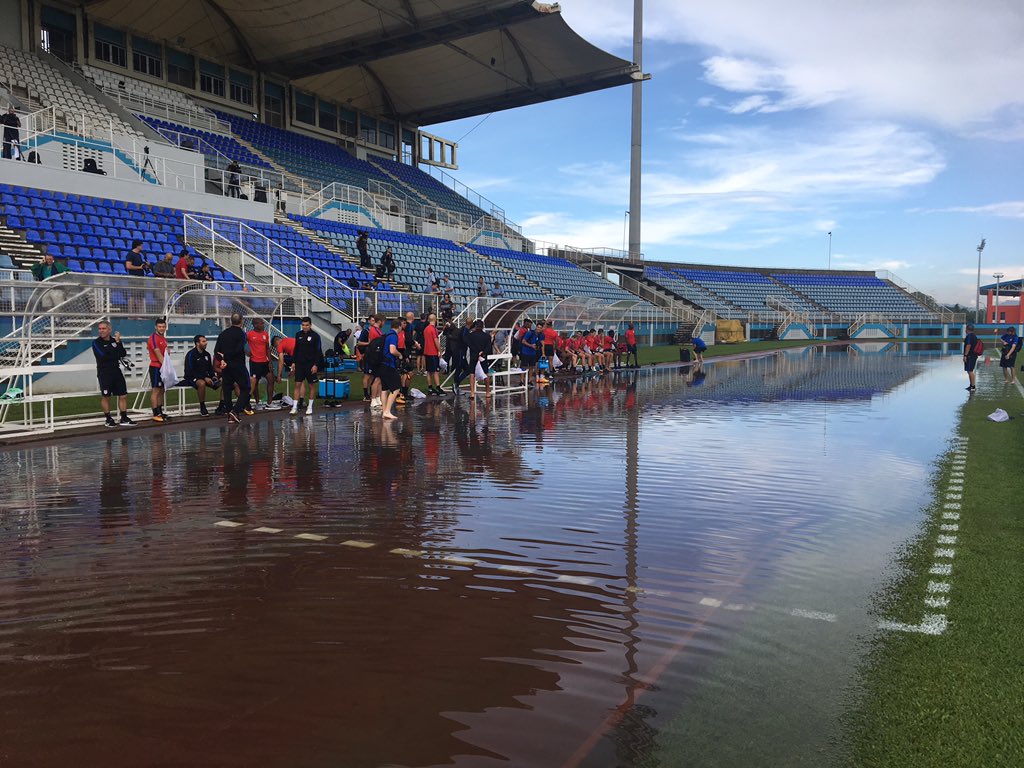 you feel me, dog?

IlliniFaninHoosierLand said:
Looks like the U.S. will be dealing with less than ideal pitch conditions at Trinidad & Tobago tomorrow night:
Click to expand...

Send in the swim team? lol

IlliniFaninHoosierLand said:
Trinidad & Tobago now up 2-0 after a goal in the 37th minute.
Click to expand...

all we have to do is NOT lose.

IlliniFaninHoosierLand
U.S. down 2-0 at half.

IlliniFaninHoosierLand
Whoever ends up finishing 4th in CONCACAF will face the Soccerroos from Australia in a playoff next month. The Soccerroos defeated Syria in a play-off in the Asian confederation to advance.
#136
Oct 10, 2017

USA eliminated from World Cup qualification. Panama qualifies directly to Russia. Honduras will take on the Socceroos in the inter-confederation playoff.
#146
Oct 10, 2017

IlliniFaninHoosierLand
Honest question...does this still happen if Klinsmann is still the coach through the Hex?
#148
Oct 10, 2017

I
Illinisoccer
So embarrassing. US soccer should never be in this situation no matter who the coach is or was. Plus it is amazing that panamas first goal never went in. Should not ever come down to the last game in concacaf for the USA
#149
Oct 10, 2017

T
tyrannosaurus scorus
USA soccer reminds me of Illini basketball so much. Play well against better opponents, then follow it up by losing to an inferior opponent the next game. Tonight's game was like Illinois losing to UIC at the United Center. There's no excuse. Hopefully this leads to better things, and the national team will start focusing more on youth rather than bygone old players. We are a country of 320+ million people and this should never happen. Ever.
#150
Oct 10, 2017

IlliniFaninHoosierLand said:
Honest question...does this still happen if Klinsmann is still the coach through the Hex?
Click to expand...

Arena had a very telling quote after the game tonight. I'm not going to look it up word for word but something along the lines of "If we did qualify for the World Cup, we would've needed to make a lot of changes." He basically admitted he knew this squad wasn't the strongest, but he was afraid to change anything. Which to me is just mind blowing and inexcusable. He was scared. Arena is a joke and the USSF is a joke.

Anyway, back to Klinsmann...he was the perfect coach for the US. Somebody who thinks outside the box and wants to do something creative. US soccer is at this weird stage where they are almost good, but not quite. And they've been at this stage for about 15 years now. They need something different (like Klinsmann) to get them over the hump. Unfortunately, the USSF never accepted him because he spoke the truth about MLS and they got butthurt.

But anyway, I just feel bad for the players. They can't play this game forever, and 4 years is a long long time for an athlete. They deserve better leadership.
You must log in or register to reply here.