CV Illini said:
The refs kept iowa in the game at the end. My experience in section B is the only thing worse than and iowa fan is.......well.....there's nothing worse than an iowa fan. Suck it iowa!!!
Click to expand...

you suck. That is all.

ginabackes00
It’s always good to take a win on the road and learn. Yes, we struggled against the press, as did Purdue, but we did a lot of positive things. It is important to remember Hawkins and Curbelo haven’t played in an environment like this due to COVID At the college level. Hawk is oozing with talent.

And living on the ILLinois side of the Quad Cities and working on the Iowa side…this brings me great joy!
#179
Dec 6, 2021

First, no way Ace was sticking around 5 years. So at most you are talking 2 years difference.

Miller will be a great player. But he’s 6’3 on a good day and I swear he has short arms because he gets his shot blocked an awful lot. We have 3 freshman, all of whom are shooters at 6’6 or better. But I think all of them are a year away.

Plummer is the perfect stop gap. Next year with our Sophs plus the incoming freshmen I don’t think we will miss Miller that much.
#180
Dec 6, 2021

I hear you, but today’s sport is different with transfers, declaring early to play overseas, enter the draft, etc. I will take the bird in the hand.
#181
Dec 6, 2021

Illini B-Ball Fan
Great win, noice team effort. Plummer is steadily becoming one of the team's most favorite players and will be indispensable the rest of the season.
#182
Dec 6, 2021

The Galloping Ghost said:
We had serious trouble getting Kofi the ball in the first half, partially because Iowa played some solid defense on him. The second half was a different story, though, and our All-American took over for long stretches. His ability to hit free throws and pass out of the post has completely changed how teams need to deal with him and made our half-court offense deadly.
Click to expand...

You nailed it! He’s finding a new dimension with his game this year. I still think he could have went a little stronger to the hoop tonight at times but defense on him was good and refs weren’t calling any fouls on him.
#183
Dec 6, 2021

wpr said:
I guess some will only accept a coast to coast 30 point win as being a "good game". I don't have FSN1 but just watching the ESPN gamecast had my heart pounding. Amazing and hard fought game. I saw in the game thread that Kofi was taking a pounding but not getting the calls. Couldn't see it but I sure believe it. Illinois always seems to get a physical game when they cross the Mississippi. Wouldn't want it any other way. I have family over there. Love to tell them about it.
Click to expand...

Big guys like Kofi have always faced a different standard. Complaining about it is like cursing the darkness. But , I am amazed by his ability to keep his cool and avoiding getting called for cheap fouls on defense. That’s not easy for the biggest guy on the floor.
#185
Dec 6, 2021

DB11Headband said:
he is by far our most talented player.
Click to expand...

Just because Kofi might very well have no NBA future doesn't mean he's not the most extraordinary talent on this year's team or last year's for that matter.

Curbelo's got a lot of talent too. So does Hawkins. So does Trent. We have a raft of talent on this team.

Anyway if we're going to see a different Curbelo when he comes back, fantastic. But the Curbelo we've seen last year is the same guy we saw once every three games last year, and we are developing a way to compensate for that again. We need to use it to whatever extent that makes us a better team.
#186
Dec 6, 2021

IlliniFaninHoosierLand said:
Before tonight's win, this was the last time Illinois won in Iowa City:


This was Groce's final season in Champaign and, at the time, was only the 2nd true road win they had had to that point in the season (the other was at Northwestern about a week and half earlier). The final score of the game was 70-66. Malcolm Hill led Illinois with 21 points and 8 rebounds. Finke, Coleman-Lands, and Te'Jon Lucas each had 12 points for the Illini.
Click to expand...

LOL bohannon was getting abused in this video, kinda funny that he's still there
#187
Dec 6, 2021

Illini B-Ball Fan
Worth repeating, if it hasn't been already: IlliniRon
That was a real quality win at Iowa. Sure the turnovers were tough but it seemed like our shooting was mostly terrific and the defense was better, and rebounding much better than prior games. Winning on the road at Iowa is just huge, so a great game by our Illini.
#192
Dec 6, 2021

Orangetool said:
There is nothing better than beating Iowa.
Nothing.
Click to expand...

foby said:
Another one seemed quick too. Maybe the refs weren't adding "mississippi" to their counts. lol
Click to expand...

On the second call (where the game clock moved just 8 seconds), it was following a missed Iowa free throw so the refs could have (should have) noted the time on the clock before the Illini rebound occurred.
#194
Dec 6, 2021

Fighter of the Nightman
Yessssssssss, that was sweet!!

Is it safe to say that if we can beat Arizona … we are 100% “back on track,” at least from an “on paper” or from a resume perspective? I’d honestly say so. While many wouldn’t have predicted a loss to Marquette or Cincinnati, we also didn’t know we’d get a shot at #11! 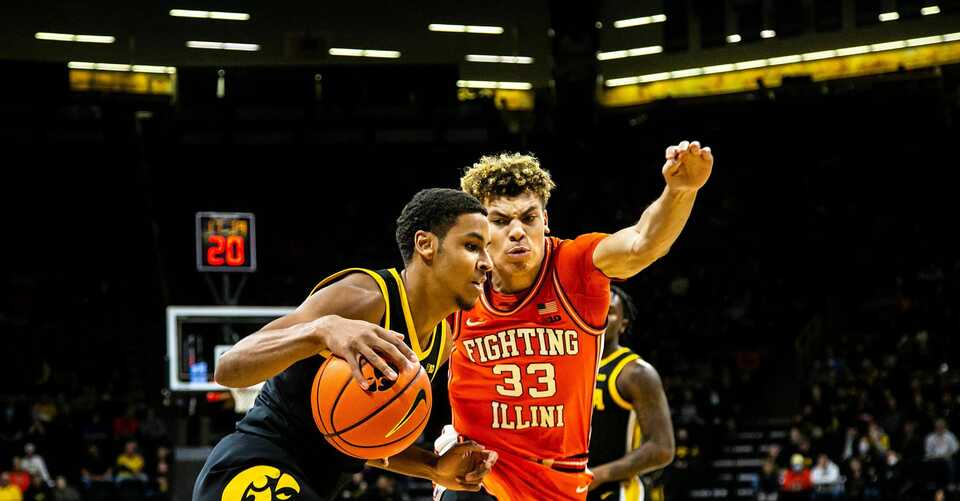 Alfonso Plummer and Jacob Grandison scored 21 apiece to give the Illini a spotless conference record two games into the Big Ten slate in a 87-83 win over Iowa. A sleepy start saw the Hawks staring down the barrel of a 10-point deficit around seven minutes into the matchup. Then a...

chiefini said:
Yes, there is: Beating Michigan…
Click to expand...

ChiefGritty said:
But the Curbelo we've seen last year is the same guy we saw once every three games last year
Click to expand...

So the implication is that Belo only played well in 10 games last year... and those 10 games were so great that they earned him B1G sixth man of the year and All Freshman team? I'll take it! Can't wait for him to be back. We are so much more dynamic with him.

Deep
Great win!!
It was nice to see Curbelo in the celebrations jumping around and celebrating with the boys
#200
Dec 6, 2021

Nuke Dukem said:
Is it just me or does it seem Kofi gets fouled at least 90% of the time he has the ball but it’s called like 10% of the time?
Click to expand...