Fighter of the Nightman said:
No word on other players’ having caught it from Bret? Great news if true!
Click to expand...

Point-Illinois said:
A) Hope he’s okay. If he’s vaccinated there is a high likelihood his symptoms will be minor/non-existent. So that’s good.

B) I wonder how many players will test positive.

C) If a bunch go down for contact tracing, that basically ends the season. Hopefully that doesn’t happen.

D) If BB is truly the only one out, I wonder how the offense will look with him not being there. That’ll test the theory that he’s having a [negative] impact on TP’s play calling.
Click to expand...

KevinC said:
Just because the boss is not in the office doesn't mean that you ignore what he wants you to do while he is away.
Click to expand...

illini0440 said:
/ Pat Ryan will be coaching this week too. He will have a headset and help GM with game management stuff.
Click to expand...

IllinoisssssssVarsity said:
Who has the green light to go for it on 4th and 1 in plus territory?
Click to expand...

illini0440 said:
I’d say George since he signals in the plays anyway
Click to expand...

IllinoisssssssVarsity said:
Wait does he only signal from what Peterson calls or he calls them all?
Click to expand...

It’s good that we have one now. But, how about a head acting coach? After the up and down season we’ve had it could be useful.Nutritionists, sports psychologists, analytics experts…they all play a role. Why not a master thespian.

What kind of acting chops does McDonald have? Has he been in anything I’ve seen? B movies? Strictly off-Broadway?

I’m sorry low hanging fruit. In all seriousness I hope Coach B. recovers just fine and we get outta this without any cases. Fingers crossed.
#164
Nov 19, 2021

The QB sneak worked so well because PSU left the center uncovered and never adjusted. Normally not a reliable playcall on 3rd and 2.

mhuml32
Illinois could be frisky if Bielema is only COVID positive person on the team. If he isn't and we are going to see some players missing the game? That's a very different story.
#166
Nov 19, 2021

illini80
I think (hope) the defense will be ready for a tough physical game.The offense is my big concern. Anyone heard anything on Josh McCray? I think he could play a big role if he’s healthy. Chase Brown needs to be able to take some snaps off and we need a physical back that can break tackles.
#167
Nov 19, 2021

illini80 said:
I think (hope) the defense will be ready for a tough physical game.The offense is my big concern. Anyone heard anything on Josh McCray? I think he could play a big role if he’s healthy. Chase Brown needs to be able to take some snaps off and we need a physical back that can break tackles.
Click to expand...

G
Genesis
I hope we've been secretly practicing Spann at QB and we'll spring a RPO on Iowa tomorrow that they have not been practicing for.
#172
Nov 20, 2021

Illinir1
Questions for the group about Illinois punt return special team. Why do we return so few punts? Why is our return yardage per kick 12th in the B1G?

When I watch our return unit it appears to me that our return wideouts almost never check/chuck the opponents coverage wideouts after the snap. It appears like they turn and run with, but don't block, the other team's gunners. Is it that we're risk adverse to the frequent holding/block in the back penalties? If we're going to let them run free, why not check them at the line and if you whiff you get the same end result? If our strategy is fair catch everything, I would think checking the gunners could give our returner more room to make the catch without defenders standing in his face, and therefore less likely to fumble (Navarro - Penn State ).

Look at the difference between Iowa and Illinois on punt returns. Iowa leads the B1G in number of punts returned with 28. On average, they're returning about 2 punts more per game, and gaining about 20 more punt return yards per game. And with every punt return there is the potential for a big gain to aid in a field position battle game. Of course, the dreaded block in the back costs you 10 yards, which negates a whole game's worth of return yardage at an average of 1.2 returns/game x 4.4 yards/return. I hope that our punt return special team performance isn't (negatively) differential in today's game. 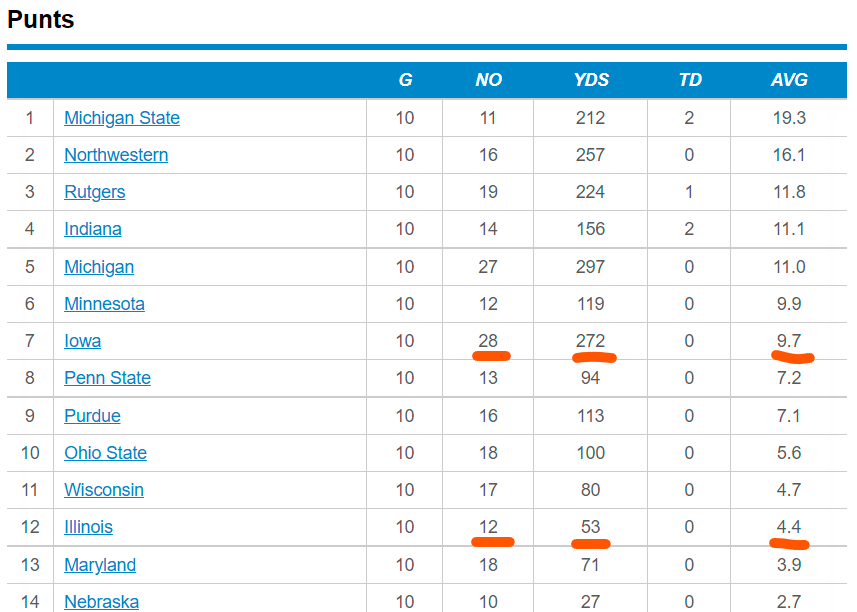 TheChief4Life
Honestly, I think the bigger question is why have michigan and Iowa returned so many punts! I haven't watched a game yet where Illinois hasn't returned a punt and I thought "they shouldn't have fair caught that!" or "They shouldn't have let that one go.". Punt returns are nearly always circumstantial, and I'd say the proper circumstances haven't been there this year for Illinois.
#174
Nov 20, 2021

Illini without Bielema as they play at Iowa

Head coach out due to COVID, assistant George McDonald will run the team Saturday.

Illinois has proven it can go on the road in the Big Ten and win against ranked football teams.
Senior offensive tackle Vederian Lowe is confident the Illini can do it again — even without their head coach.
Bret Bielema said he’ll be sitting at an undisclosed location in the Champaign-Urbana area — after testing positive for COVID-19 earlier this week — when Illinois travels to face No. 18 Iowa at 1 p.m. Saturday at Kinnick Stadium in Iowa City.

“It’s definitely a different feel with Coach B not being around and hearing him at practice, but they said it’s a next-man-up mentality,” said Lowe, who is making his 45th straight start. “People go down and the next man is supposed to come up and produce the exact same way we would expect the first guy to produce.”

That means Illinois assistant head coach George McDonald, who also is in charge of the receivers. Bielema said he’s had a plan in place since the spring that if something would happen where he couldn’t be at a game, McDonald would step into his duties.


Bielema didn’t want one of his coordinators — Tony Petersen (offense), Ryan Walters (defense) or Ben Miller (special teams) — to be distracted from their usual practice and game-time responsibilities.

I feel a pulling together of the squad and a win one for the coach attitude.........