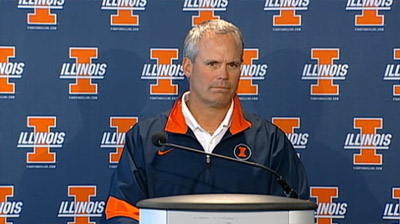 Beckman: OL depth chart could change in last few days. Mentions Karras came back well from foot injury.
Beckman: Feldmeyer is "95 percent," dinged up his shoulder/arm a bit
Beckman: Justin Staples is serving his one-game suspension vs. Western Michigan. Will not play.
Beckman: All three RBs (Ferguson, Young and freshman Dami Ayoola) will play. Said it's an "outstanding" group of RBs
Beckman: Billy Gonzalez and Chris Beatty will both have input on playcalling on offense. Beatty will make first call from press box.
Beckman mentions Akeem Spence and Ashante Williams as two defenders who had "outstanding offseasons."
Beckman said he'll likely kick the ball out of the endzone, give team ball at 25. He said NW led Big Ten with field position at 26.
WernerConnectFM

Beckman: I like to chest bump and run down the field with them #Illini
MattWettersten

Beckman said no decision has been made on Hull and Sanni for Saturday.
Beckman said Karras made a quick recovery from offseason foot surgery
BobAsmussen

OL Simon Cvijanovic will not play this weekend, per coach Tim Beckman. Would not disclose why. He's been practicing, so not injury related.
Tommy Davis will be the punt returner, Beckman said. Josh Ferguson, Terry Hawthorne and Justin Green to rotate at kick returner.
FletcherPage