illini80
Interesting question. We’ve been bad for so long now and mostly uncompetitive, that I haven’t felt a lot of animosity towards programs I normally would. It’s hard to get juiced up for a game against someone that’s likely to deal you a beat down.

redwingillini11
The Illinois football rivalry question is a difficult one.

I have really come to hate Iowa in recent years, so I guess they are the answer. But if we can be a regularly bowl-eligible team (and when we start playing Mizzou and perhaps Indiana more often), we will make a lot more of these series competitive, and our biggest rival may be different than it is today.

I
IlliniSon
Close call between Iowa and Northwestern but I went with Iowa. Really cannot stand Michigan either.
#6
Jun 23, 2021

B
Bleedorangeandblue44
Love the question, both this one and basketball. Feel like with football we can show our age in our answers....those old-timers like me who remember when we used to be able to occasionally beat and be competitive with Michigan, I went there with my answer. Never forget the 2000 all-time ref debacle in about as electric of a Memorial Stadium as I've seen. We had them beat.
But I also get how bad we've been for so long that to call Michigan a rival is kind of silly.
#7
Jun 23, 2021

SoILL_INI
Hands down Iowa, in all things, mostly because I feel like we should be able to compete, and for the most part win any match ups with them. But somehow they always seem to have our number. And I don’t count the last couple of years, ya know cause of the Lovie effect!!!!!!
#8
Jun 24, 2021

altenberger22
Up until conference expansion and the creation of the two Big Ten divisions, we had just two schools on our schedule every year ---- and just those two. Ohio State and Michigan. Everyone else in the conference was on a rotational schedule with us. Hence, I grew to hate those two more than any other --- particularly with all of the 63-0 annihilations in my early years. That made it even sweeter when Mike White turned things around and helped ensure numerous wins and competitive games against the two throughout the 1980's.

Now that Michigan has fallen off, I clearly despise Ohio State the most.

The 12-team playoff should help ensure incoming talent is spread more evenly across the conference, and across the nation, thus eventually knocking OSU back to the current level of 1-time perennial powers USC, Texas and Nebraska. No one needs to be playing in the NCAA semi-finals every single year. That's not how it's supposed to work. B-O-R-I-N-G and Elitist.
#9
Jun 24, 2021

TX Illiniwek
I with many - Iowa leads this pack but Michigan a close second. My favorite Michigan win is probably 1982 game that sealed our Rose Bowl birth. Northwestern should be tops on this list, but I just can't get jacked up for them. Maybe because they were so bad for so long back in the day. But, if they continue to put beat-downs on us like they have - especially in 2019 - they might come to the forefront.
#10
Jun 24, 2021

Illiniaaron
For years and years I hated Iowa. It helped with Hayden Fry's clear disdain for Illinois, I was at a game in my college years when he clearly ran up the score against the Illini at Memorial Stadium. They also had a long line of basketball coaches easy to dislike so that helped to cement my hatred. Now I have to say they way Fitzgerald looks down at Illinois the Cats are the team I would love to pummel.
#11
Jun 24, 2021

dgcrow
Purdue is the closest rival geographically to the UI, and my Dad hated their football team. But I voted for Northwestern, bitterly remembering the times they pulled major upsets against the Illini.
#12
Jun 24, 2021

Shief
I grew up near Bloomington-Normal and some in that area and west hate Iowa, my family in eastern IL hates Indiana, and I dislike Mizzou cause I have family near KC. The preferred rival might vary due to where the person lives.

Side question, should Illinois create football rivalry trophies with Indiana and Iowa?
#13
Jun 24, 2021

Shief said:
I grew up near Bloomington-Normal and some in that area and west hate Iowa, my family in eastern IL hates Indiana, and I dislike Mizzou cause I have family near KC. The preferred rival might vary due to where the person lives.

Side question, should Illinois create football rivalry trophies with Indiana and Iowa?
Click to expand...

Do you know the history of Illinois / Iowa football? Things got so ugly during the 1952 game that they didn't play each other again till 1967. I think that already qualifies as a rivalry.
#14
Jun 24, 2021

dbeaverfg said:
Do you know the history of Illinois / Iowa football? Things got so ugly during the 1952 game that they didn't play each other again till 1967. I think that already qualifies as a rivalry.
Click to expand...

dbeaverfg, that was before my time but I've heard about that game. People also bring up Bruce Pearl's time at Iowa, but that's a basketball event.
#15
Jun 24, 2021 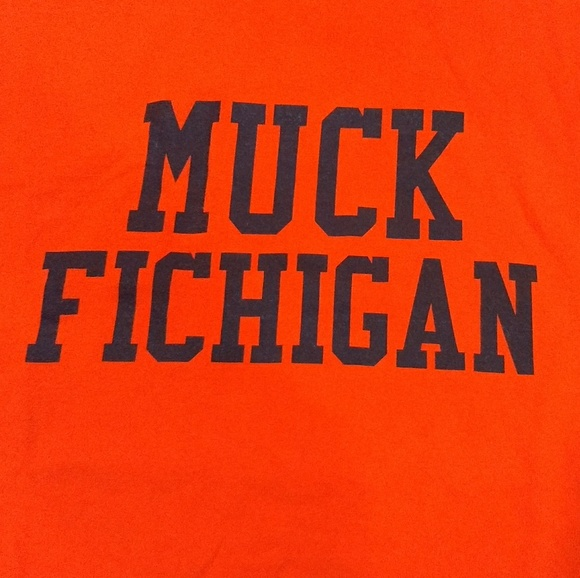 ezekial2517
This one was closer for me than basketball was. I have Iowa first and Michigan not far behind in football. Just never liked them, they've had our number forever and don't seem to mind running up the score.
#18
Jun 25, 2021

chiefini said:
I have to admit, I actually own one of these t-shirts…
Click to expand...

SKane
Too late for the poll but I would say Michigan for most hated and Northwestern for rival..

Michigan most hated because of Schembechler and Moeller. Not really a rival because they almost always beat the Illini.