KevinC said:
We tend to play not to lose. There may be instructions to fair catch the ball in a lot of instances and, minimize the chances of a fumble.
Click to expand...

CHAMPAIGN — Nine games have come and gone this season without Illinois finding its way into the end zone during the first quarter.

CHAMPAIGN — Nine games have come and gone this season without Illinois finding its way into the end zone during the first quarter.
When asked Monday how he can jump-start an offense that has just recorded a lone field goal in the first quarter thus far, Illini head coach Bret Bielema wanted to set the record straight.
“We actually have five total points as a team. I’m going to try and slide in every point I can,” Bielema said, referring to a safety in the opener against Nebraska.
Of course, Bielema was joking. He knows to have any success in the final three games to close out his first season on Illinois’ sidelines, it would help to get a touchdown on the board early.

“That is absolutely as bad as it gets,” he said of the first-quarter offensive woes.

Illinois has been outscored, 51-5, in the opening quarter. With four of their losses coming down to the last possession in the fourth quarter, striking in the first 15 minutes might help change the tone of the game.

“There’s been a huge emphasis the last several weeks on trying to score early,” Bielema said. “It’s an obstacle we’ve been trying to work our way through and haven’t been able to overcome it.”

The offensive woes of the Illini along with headscratching coaching decisions has made this year unbearable at times to understand whats going on ......

mossimo142 said:
THIS! I honestly don't think we've attempted to run back a KO or punt?!
Click to expand...

Through 9 games, a grand total of THREE kickoff returns! But hey, at least we're not last in the number of punt returns!.... 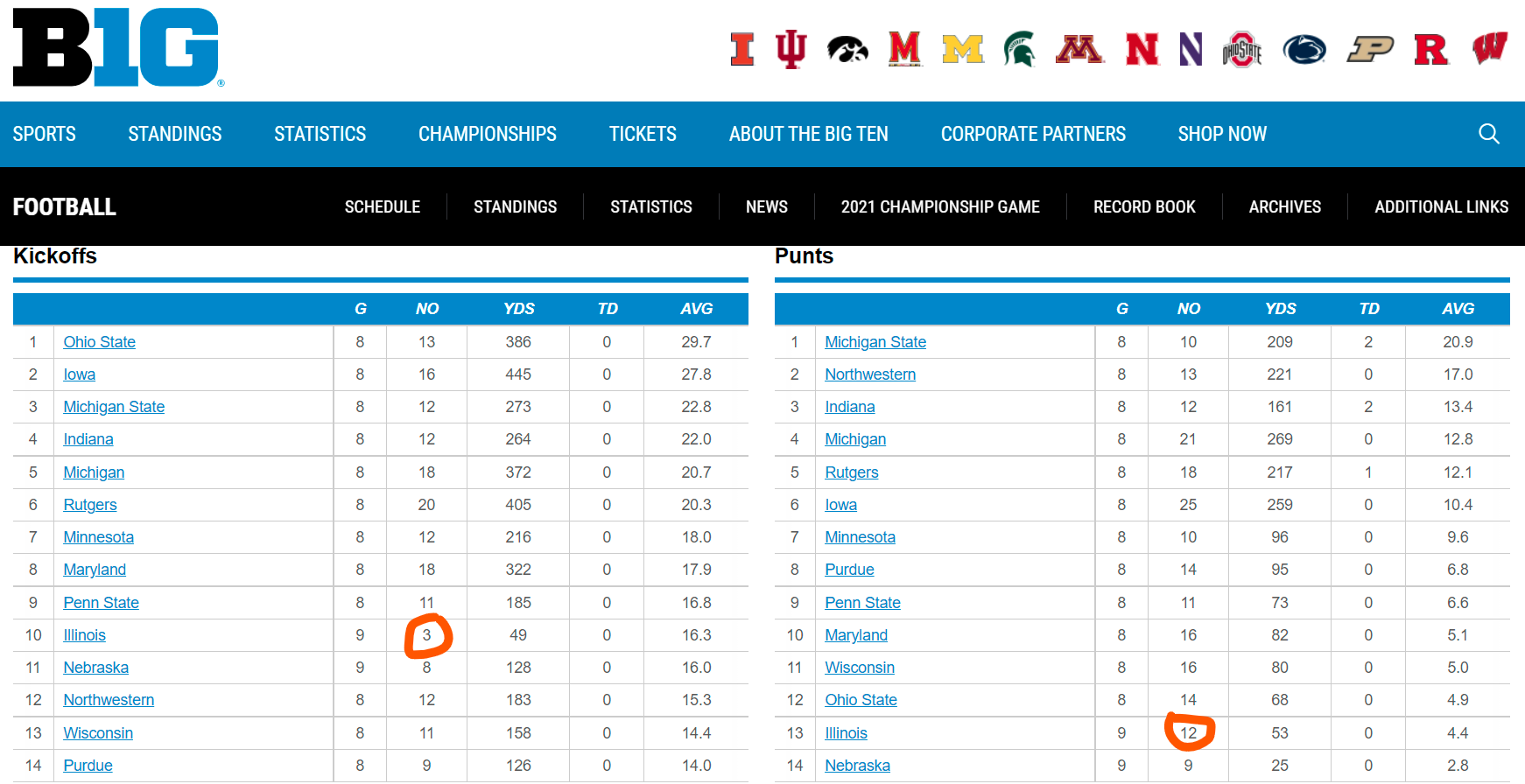 Illinir1 said:
Through 9 games, a grand total of THREE kickoff returns! But hey, at least we're not last in the number of punt returns!....

I’m not too sure on the punts, but on KO returns, I think the %’s would say you’re better off taking the ball at the 25 most of the time. I’d guess it’s not close, but I don’t have the data to back that up. The numbers above don’t tell you what the ultimate spot of the ball was, but you would think most of those returns were inside the 5 at a minimum.
#30
Nov 2, 2021

N T A C F said:
Trying to help out this anemic offense might help us not to lose
Click to expand...

C
CheifKeith91
would love to see us shut down Markeise Irving, while our RB’s have another penn st like game. Call me bitter... but I want revenge for him choosing Minny over us
#33
Nov 3, 2021

Guess I’m a little surprised at the terms. Making 4.65M now and it increases to 5M next year and stays there. His buyout increases by 2.5M in year 2 and 1M in later years vs what it was. That’s not even 1% per year avg increase. And his buy goes up significantly if he leaves. What am I missing?
#36
Nov 4, 2021

Essentially the exact quality of team that was expected via a much worse offense and much better defense than expected.
#37
Nov 4, 2021

If after Northwestern we improve to a mid 80s offense and high 40s defense, that’s a great way to end the season. Shows that we were still fighting and getting better to the very end. Hopefully that’s what happens and a few more wins wouldn’t be too bad either.
#38
Nov 5, 2021

Frontierman said:
It's hard to believe that there are over 30 teams with a worse offense than ours...
Click to expand...

Yes, if you’re looking at passing. We have a pretty decent run game. Especially considering there’s no pass offense teams have to account for.
#40
Nov 5, 2021

illini80
After hearing more about Minnesota this week, I’m not liking our chances. Hopefully the staff has been able to find something on film we can attack like the Penn State game..
#41
Nov 5, 2021

DeonThomas
Speculating we'll ride the defense to a "not so awful loss".

BWBW said:
We are elite at snatching defeat from the jaws of victory. No one does it better.
Click to expand...

It's like Lucy with the football and the Illini fans are Charlie Brown. She's really going to let us kick it this time. She promises.
#46
Nov 6, 2021 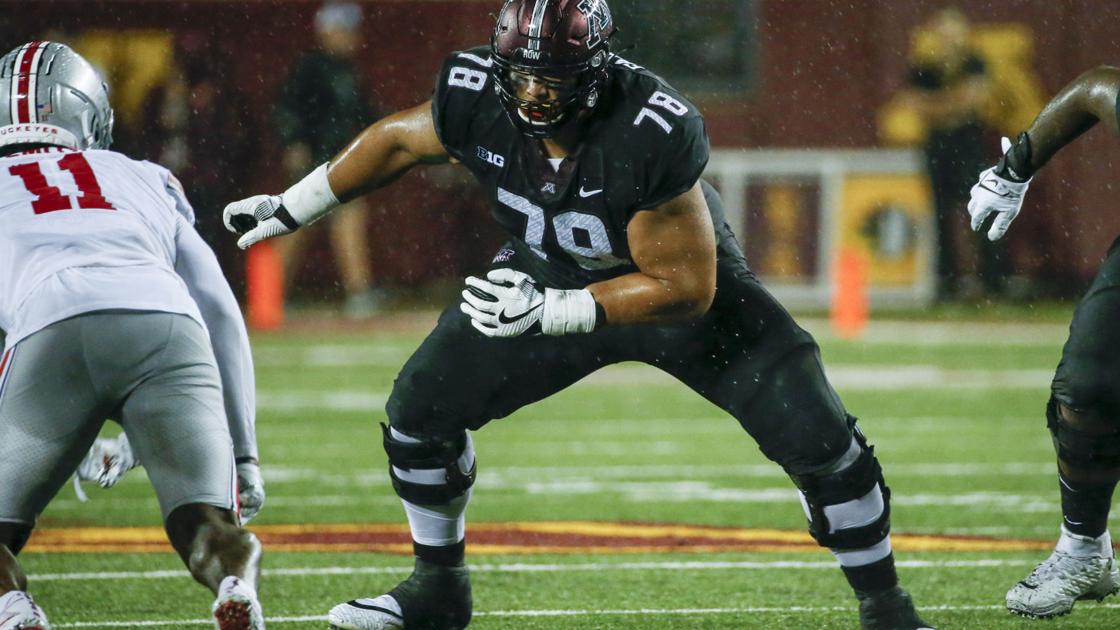 CHAMPAIGN, Ill. — The calendar has flipped to November. The significance was not lost on Bret Bielema this week.
Illinois’ first-year head coach has stressed to his team this is the time of year when championships are won, especially in Big Ten country when the weather turns cold and sometimes snowy.
Although Illinois needs to win its final three games just to reach .500, Bielema knows the importance of this month for the program’s future and long-term goals.
“Even though we’re not probably competing for the Big Ten West title, I want the mentality established now for our team so when we’re in that position they know what I’m talking about,” he said.

The Illini will get a first-hand look Saturday at a team in a position to capture a championship.
Minnesota has won its last four games to take the lead in the Big Ten’s West Division and entertains Illinois at Huntington Bank Stadium in Minneapolis.

Minnesota (6-2, 4-1 Big Ten) has developed a mindset under fifth-year head coach P.J. Fleck that reflects being built for success, especially in November.
The Gophers, who were No. 20 in this week’s first College Football Playoff rankings, are first in the Big Ten in rushing defense, allowing 92.9 yards per game. Only one opponent has run for more than 144 yards.

The stats above about their rushing D is of great concern for me , especially after our dismal rushing performance against RU........I have zero confidence in BP and the OC being able to counter that stat with anything close to a normal P5 passing attack.....................

I
IllinoisssssssVarsity
I was watching that travel video on the front page, for those in the know, are our guys able to fly direct to their destinations or do they have to connect through Chicago first? Same question for the way back.
#48
Nov 6, 2021

KnoxIllini2
As the internet community that I identify with the most, on a personal level, this has been a rough, rough week. Haven’t really put much thought into the game, but I do have a few things I’d like to see:

The Illini need to come out angry if they want to have any chance. I firmly believe that if PJ Fleck could ram an oar down any teams throat, Illinois might be at the top of the list. If we come out flat this will be over quickly and it will be a long day.

Comparisons to the early Underwood seasons are valid, especially when putting together complete performances. Last week, had an excellent first half followed up by a disappointing second half. Hence coming out angry being vital today.

If we fight and play a complete game today, we shouldn’t have anything to be upset about after 60 minutes. Throw in some competent offense?Look out, we might even feel some confidence heading into the bye.
#50
Nov 6, 2021

usually they fly a charter direct. That was the first time I can recall seeing them flying a carrier, but it looks like they chartered that Allegiant bus. I've flown Allegiant a couple times out of Peoria.