ElGran said:
I doubt the three play together very often. Trent and Andres will both get 30+ min/game. When either goes out Plummer will go in. So I’m guessing 20 min/game is his ceiling (unless God forbid, Trent or Andrés gets hurt).
Click to expand... 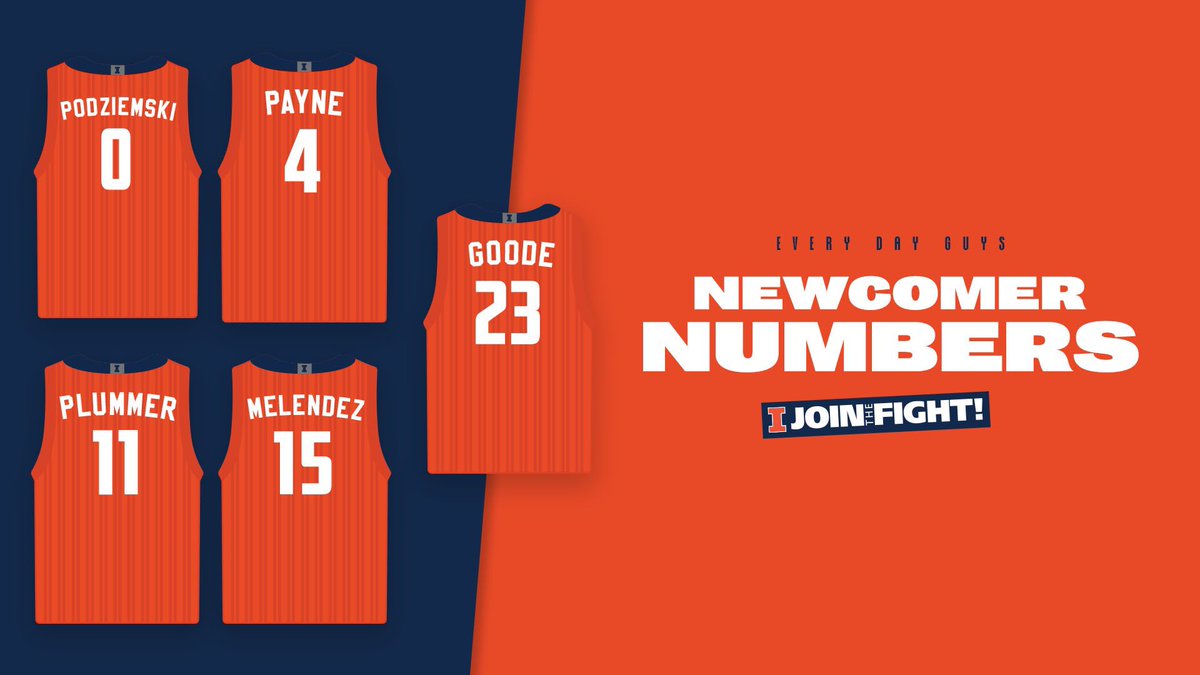 HailtotheChief said:
This is a reasonable expectation. I agree with. He can make a reasonable progression and contribute to the teams success. I was commenting on him being "the future to our teams success for the next 2 or 3 years". Most here feel BU has them as a top 10 or better team again this year. On the type of team we have now where would someone like Carter fit in with this talented team? Likely not much different than Hawk does. Kofi, AC, TF, AP, Jacob, likely Hutch, DMW would be ahead of him. Carter would likely be ahead of DMW backing up the 4 were i dont think Hawk is quite there yet. We may have a gem in Payne too. Carter was a solid player and Hawk can be too. This is a very good and talented team and good players will see limited tick due to our depth and talent.
Click to expand...

EthanM said:
Sorry but this is beyond a bad hot take. Warren averaged 13.7/6.1/2.0 as a senior. He’s easily the starting PF on this team in front of Jake and DMW. It wouldn’t be close.
Click to expand...

Agreed. It took Carter a while, but by his last year he was more than solid. If he was on this roster, IMO he would be the starting PF. We've got some decent options there in Grand and Hawk, but I'd take a senior Carter over either.
#380
Aug 14, 2021

illiniguy said:
They're not retiring Ayo's number?
Click to expand...

Illinois Basketball does not retire numbers. They honor specific player’s jerseys by raising them to the rafters of the Assembly Hall/State Farm Center using specific criteria to earn that honor. Ayo has achieved consensus First Team All-American status so his honored jersey should/will be raised soon. Kofi has already achieved consensus Second Team All-American status so I’m betting he will have his honored jersey raised after he leaves campus. Other criteria is involved with the 30+ honored jerseys in the history of Illinois Basketball who have been raised to the rafters, but no player’s jerseys have ever been retired. 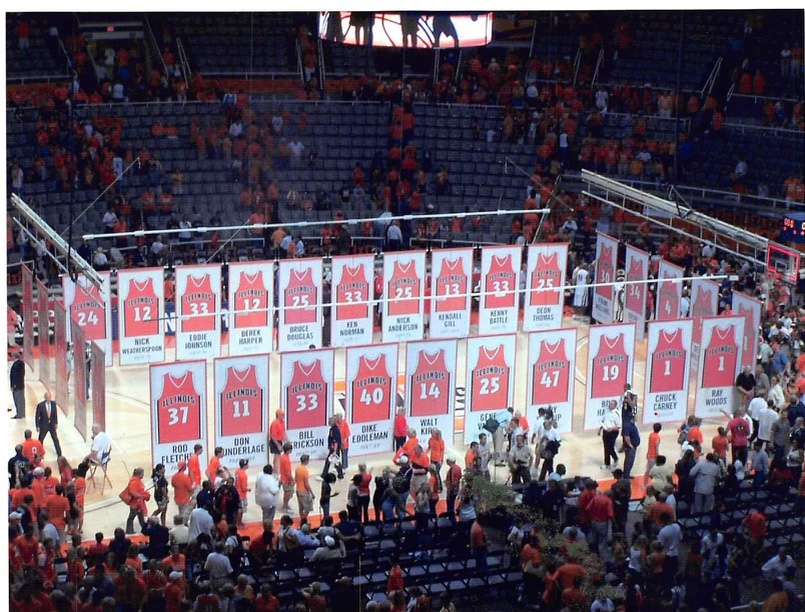 The Galloping Ghost said:
I think comparing Griffin/Jones to anyone currently assumed to be in our rotation is kinda ridiculous. Those were dudes that were complete knuckleheads on bad teams that had no clue what they were doing. You look at someone like Plummer and he played 28 minutes a night on a high major team. He might not be a lockdown defender, but he also doesn't need to be. He's shown that he can contribute to a defensive system and be where he needs to be on the floor. An apt example for someone like him would be Curbelo last season. He might not be a plus defender, but he was in the right spot, and his offense coming off the bench more than makes up for his defensive deficiencies.

Just gonna drop this here so people remember how good Plummer is. Note the defense.

Great highlights for Plummer on that video. One thing that stuck out for me is how can anyone play on that barf

The Galloping Ghost said:
"Boeheim, in his post-game Zoom call with media members after the deflating loss to Duke on the road, said that Griffin, for two contests in a row, is doing these “one-dribble pull-ups” for which the head coach doesn’t seem fond."

"Regarding the woeful defensive performance put forth by the forwards, and really the team as a whole in recent games, Boeheim said, “There’s no excuse.”'

Syracuse basketball forwards Alan Griffin and Quincy Guerrier are among the top scorers on the team, but head coach Jim Boeheim wasn’t thrilled with the ...

In Griffin's 3 NCAA games this season he had 15 minutes and 0 points, 11 minutes and 3 points, and 13 minutes and 2 points. There's a reason Griffin got benched. It's the same reason things didn't work out here. You can't trust him to run the system.
Click to expand...

Pointing out that Griffin didn't get tick in the tournament doesn't mean that he was a "knucklehead" that had no clue what he was doing. Griffin was such an offensive spark that he got tick for a good Illinois team DESPITE playing pretty bad defense. Genuinely not sure what point you're trying to make here
#384
Aug 15, 2021

illiniguy said:
They're not retiring Ayo's number?
Click to expand... 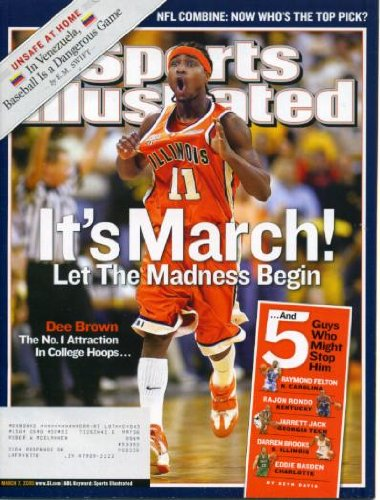 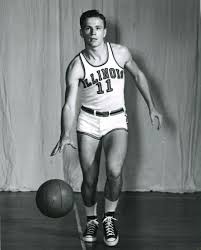 1951 - First-team All-Big Ten
1951 - Team MVP and Captain[12]
1951 - All-American
1951 - Earned the Chicago Tribune's Silver Basketball award
1951 - Big Ten Player of the Year
1951 - University of Illinois Athlete of the Year
1973 - Inducted into the Illinois Basketball Coaches Association's Hall of Fame as a player.[13]
2008 - Honored as one of the thirty-three honored jerseys which hang in the State Farm Center to show regard for being the most decorated basketball players in the University of Illinois' history.
#386
Aug 15, 2021

Highlander said:
And before Dee…

1951 - First-team All-Big Ten
1951 - Team MVP and Captain[12]
1951 - All-American
1951 - Earned the Chicago Tribune's Silver Basketball award
1951 - Big Ten Player of the Year
1951 - University of Illinois Athlete of the Year
1973 - Inducted into the Illinois Basketball Coaches Association's Hall of Fame as a player.[13]
2008 - Honored as one of the thirty-three honored jerseys which hang in the State Farm Center to show regard for being the most decorated basketball players in the University of Illinois' history.
Click to expand...

HailtotheChief said:
We have a lot more than Hawk or any one unproven player being the future of our program. I expect as much or more from our very athletic new players as I do from Hawk we have seen Hawk play 6 minutes a game last year not 26 a game like AC as a freshman
He certainly can improve but we need to be realistic here. To label him the "future^ of our program over the 2 or 3 years given what we have seen so far and the more athletic true shooters is a bit much. I hope Hawk improves but he wasn't the best player on his high school team and I dont get why some think is one of our best players now or certainly not future of our program! He can improve and help our team win games and be a solid teammate. I hope he grows into an All American like Ayo, Kofi and hopefully AC but that is way premature and really has no foundation. We will continue to add better players with winning and BUs leadership. Coach Underwood has the keys to our teams future not any one player.
Click to expand...

I think what he means is that Hawk will be here in the future, whereas DMW will not? Very hard to coach that way with the current transfer environment though.
#388
Aug 15, 2021

LongLiveTheChief said:
I think what he means is that Hawk will be here in the future, whereas DMW will not? Very hard to coach that way with the current transfer environment though.
Click to expand...

IllinistuckinGopherland said:
I’m going to guess the University of Utah did not pick the music for this video.
Click to expand...

WhiteHorseWings said:
Yeah but those shorts…
Click to expand...

IlliniCaboose
I was kinda hoping Belo would go back to 11 since that's what he was going to be before Ayo decided to come back for year 3. 5 Works well for him though as well.
#392
Aug 15, 2021

WhiteHorseWings said:
Yeah but those shorts…
Click to expand...