Jguede said:
You guys are a joke...what team does Trevian play for...in what conference...against what competition is avg. 20 give me a break.
Click to expand...

New Creation said:
Underwood is heated.. I'm glad he is.. He is ready to figure something out.. Someone won't be starting against Penn State
Click to expand...

I’d really like to see Grandison start next game. He is a big body who hits 3s, gets rebounds, and had two beautiful feeds to Kofi tonight.

In my head, the idea of Miller coming off the bench and running the second unit with Giorgi, Hawkins, and Belo seems like it’d be chaotic at times but ultimately a great change of pace vs our bruising starting 5. And also great for reps as our future starting 5.
#129
Jan 16, 2021 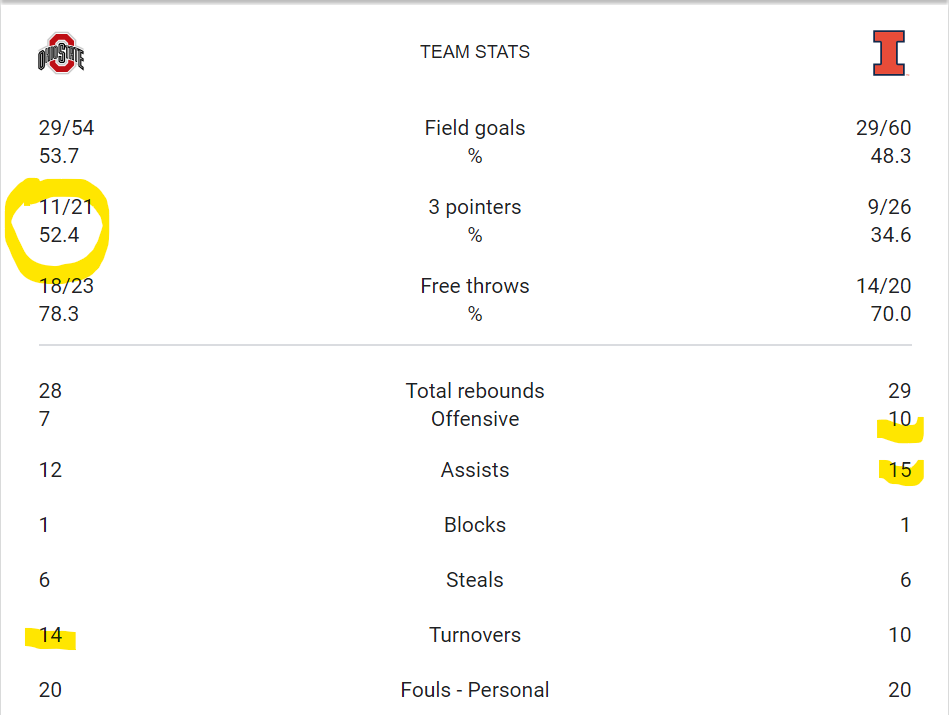 Talent wise, Iowa is the only team in the B1G on our level. But as far as team basketball and coaching goes-that’s what is currently bringing us towards the middle of the pack. Better shape up soon!
#131
Jan 16, 2021

Ryllini
I haven’t see one team this side of Spokane that has overall better players than Illinois or that has a better team than Illinois. Baylor is included, if it wasn’t for about a 4-5 minute lazy stretch in the second half, common theme as we have them in every game, Illinois wins that game or has a shot at the end. With that being said, I think our guys think they are a lot better than are. For a team that got robbed of a shot last year, you’d think they be out stealing lunches instead of the other way around. No team cares about the talent we have, and no team cares that we were robbed, there were 68 teams that had their chance taken away too.
#132
Jan 16, 2021

Guy having a “revenge” game

Other team shooting lights out in our gym

Ridiculous officiating at a crucial moment

TCTORNADO said:
tOSU was without their starting PG, CJ Walker
Click to expand...

Sounds like Illinois is 0-2 in the B1G when the opposing team is without its starting PG? Let’s just hope Wheeler suits up on Tuesday for PSU.
#137
Jan 16, 2021

To quote an old They Might Be Giants song...

“If it wasn't for disappointment
I wouldn't have any appointments”

H
Hopingfor500
Boy, BU was steamed. I feel like a majority of his fire was directed right at Kofi and potentially DW and Curbelo. Maybe I heard his tone wrong or am reading too much into it? He made a point of mentioning Miller, Frazier and Grandison as positives. He made a point to say that Ayo carried his weight.

The direct comments were at Kofi(free throw shooting, dealing with contact, bringing the ball down, etc.)but after watching the games that they had, going back to the Maryland game.....I see changes in the future.

R
RickBB
I admit, I turned off at roughly 10 minutes to go because the Christmas lights needed to come down and it seemed like we went on a run, but there wasn’t any significant difference in the score. I didn’t think I’d do that this entire year.
#141
Jan 16, 2021

this team shouldn’t need a crowd to win games like this.

Hopingfor500 said:
Boy, BU was steamed. I feel like a majority of his fire was directed right at Kofi and potentially DW and Curbelo. Maybe I heard his tone wrong or am reading too much into it? He made a point of mentioning Miller, Frazier and Grandison as positives. He made a point to say that Ayo carried his weight.

The direct comments were at Kofi(free throw shooting, dealing with contact, bringing the ball down, etc.)but after watching the games that they had, going back to the Maryland game.....I see changes in the future.

That was probably the most irritated as I've seen him in a post game.
Click to expand...

I wonder what changes. Not sarcasm. Really would like to see some shakeup but no idea what. Can’t bench Kofi. More GB minutes? Start grandison over DMFW? Maybe. Start Curbelo? I think we can shelve that idea. Truly a perplexing team.
#143
Jan 16, 2021

Illiniwacker said:
Ohio State is better. As are 5-6 other B1G teams.
Click to expand...

Steelyunk said:
Yeats opinion on this squad. Pretty obscure reference for a message board. Apologies.
Click to expand...

Retro62
During football season, I’m always thinking “looking forward to basketball at least.” Today, I found myself thinking “wonder how we’ll look next fall with Bielema?”

Takeaway -
We shot 58% from the field inside the arc. OSU shot 54% from 2pt range.
Yet, we took 5% more of our shots from 3-pt range than OSU did, and made two fewer on five more shots.
We turned them over like crazy in the second half to tighten things up, and started hitting the boards like we're capable.
But terrible decision making on offense in the first half (and three terrible officiating calls in the second half) bit us in the butt for the second game in a row.
I'm real curious as to what changes in the starting lineup that BU will make for PSU. Start the game in a fullcourt press or something to shake things up, I dunno.
#147
Jan 16, 2021

Fighter of the Nightman said:
Guys, I am an optimist to my CORE. I will be right back on Tuesday talking about how a win vs. Penn State could get us on a nice little winning streak. With that said... How could there even be ONE poster left making excuses?! Losing like we lost today is infinitely more frustrating than just losing by 10. Someone in the game thread said that last year's team was better than this year's, and it wasn't close; I am going to have to agree. While I knew that last year's squad was unlikely to blow out Minnesota or Nebraska or Northwestern at home, I also knew that they were rock solid and tough - it would be rare that they didn't come out with pride and effort. To let these huge leads grow on us is M-E-N-T-A-L. I am sick of hearing about some guy having a career day and how BU can't make FTs for our guys or whatever other excuse there is. You can explain away anything in a relatively close loss if you want to, but it takes someone in denial to not see the trends. If we lose to Penn State, any hope of a top four seed and a serious Tournament run just might be over. And ~making the Tournament~ or ~being ranked~ or any other "achievement" that might have seen elusive last year is simply NOT GOOD ENOUGH for this year's team. Period. Such a disappointing game.
Click to expand...

We lost so this is going to sound off because we don't have the deliverable, but we ARE a mentally tough team. That second half comeback was all pride and grit. It just wasn't enough to compensate for the enormous hole we put ourselves in. If a call or two goes the other way or we hit one more 3 and they miss one more 3, all we would be talking about is how gritty and tough this team is. We lost because we weren't prepared at the beginning of the game and the ball had eyes for OSU.

The bad calls were tough to swallow. Also, when Kofi was on the receiving end of a flagrant and we got 0 points from a 4 point opportunity, that is tough to stomach when you're trying to comeback.

I could chalk this one up to OSU shooting and tough calls down the stretch and still feel good about this team in a vacuum, but Maryland, Rutgers and Mizzou losses make this one too precious and important to accept.
#148
Jan 16, 2021

fulton steamer said:
No. My apologies. I should have recognized it.
Click to expand...

I
illiniu
I like a certain team with guys named Dee, Deron, Roger, James et al. Long time ago. And I've got a DVD of that season. But I also remember 83-84 and 88-89 teams. This new edition doesn't rate with those teams no way, no how.

U
UCantHideYer
It seems like the game plan was to let Kofi catch in too close. He puts the ball down when he's too far under. OSU got away with mugging him down there without any fouls called and were wise to with Kofi's FT chances. I think a coaching adaptation we needed to make was to get equally as handsy. We applied pressure on the inbounds but I can recall only Trent getting close to a tie up (which the refs also should have called...especially as a make up for the no call on the AM mouthful of shoulder).
Share:
Facebook Twitter Reddit Pinterest Tumblr WhatsApp Email Share Link