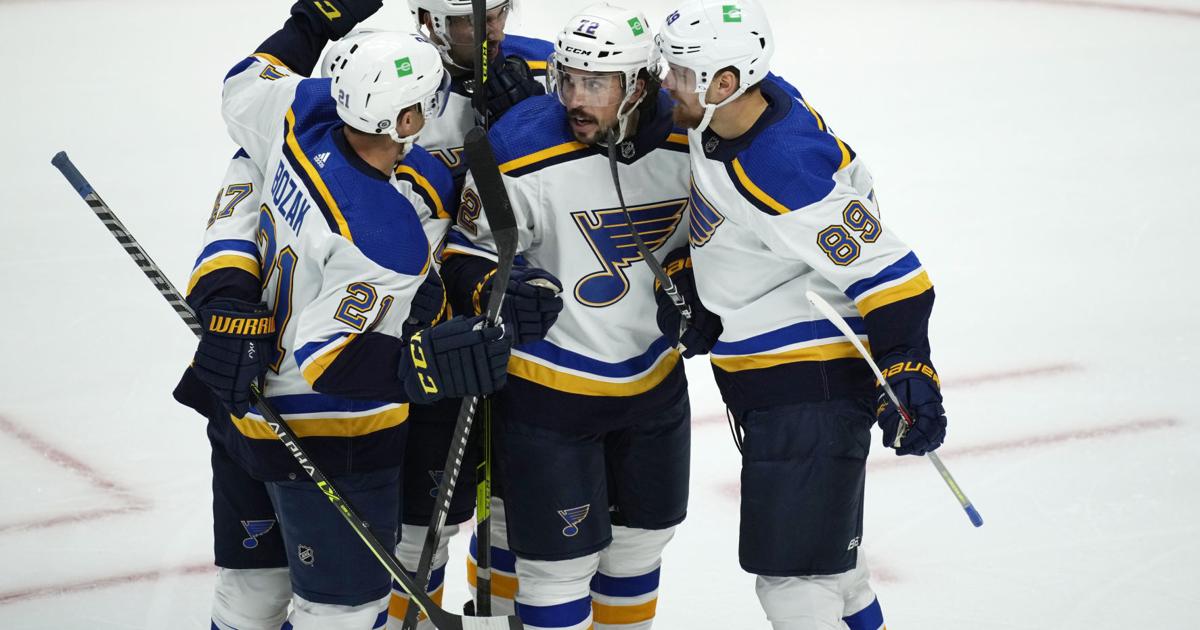 DENVER — As much as the Blues said getting swept last May in the playoffs by Colorado was in the past, they remembered. And Brayden Schenn remembered, the hit by Nazem Kadri in Game 2 on an illegal check to the head that ended Justin Faulk’s season.
Schenn dropped the gloves to fight Kadri just 40 seconds into Saturday’s season opener against the Avalanche at Ball Arena. That set the tone for a game in which the Blues jumped out to a 3-0 lead, and then with the help of a disallowed Colorado goal that would’ve tied the game at 4-4 with 2 minutes 49 seconds left to play held on for a 5-3 victory.

“These guys, they care about each other,” coach Craig Berube said. “A pretty close team here. These guys, they just take care of that stuff themselves. But it’s great to see that the care is there for your teammate.”


Suffice it say Faulk was highly appreciative.
“Schenn’s obviously a great teammate, fits the mold exactly of what you want as a teammate,” Faulk said. “You couldn’t ask for more from him, day in and day out. There’s a reason he’s a leader on this team. Those things aren’t asked of people but he’s the type of guy that will take care of his teammates.”

Schenn said he thought about it for a while. And he’s had nearly five months to think about it since the Kadri hit occurred on May 19.

Blues played great and held off a late Av's charge....The Av's thought they had scored the tying goal but it was disallowed because it was kicked in with a skate....

Next game is Monday against the Arizona Coyotes.....

pruman91
Blues got rolling big time in the second period

Blues up 6-2 end of second period

Lots of wild and crazy as Blues outscore Coyotes, 7-4

Kyrou and Kostin both score twice; Buchenvich gets ejected for head-butting

GLENDALE, Ariz. – There was a head-butt and match penalty early for Pavel Buchnevich.
All kinds of rough stuff and 14 minutes of penalties against Arizona’s Jakob Chychrun late.
And in between? Goals. All kinds of goals, particularly in a five-minute stretch in the second period.
It added up to another wildly entertaining win for the Blues, 7-4 Monday over the Coyotes at Gila River Arena.
In his season debut, Klim Kostin scored twice. Jordan Kyrou (two goals, two assists) has picked up where he left in last year’s breakout season – or even kicked it up a notch.

His head-butt of Arizona's Lawson Crouse will also cost him more than $141,000 in salary.

LAS VEGAS — The Blues will be without Pavel Buchnevich for two games as a result of a suspension handed down Tuesday by the NHL’s department of player safety.

“It is important to note that Buchnevich’s head makes clear, direct, and intentional contact with Crouse’s face,” the league said in a video reviewing the hit and suspension. “This is not two players hitting their heads accidentally or inadvertently. This is an unacceptable and intentional head butt delivered to an opponent’s face with some force.”

Based on his average annual salary, Buchnevich also will forfeit $141,463.42. The money goes to the players’ emergency assistance fund.
The suspension is the second of Buchnevich’s six-year NHL career. Last season with the Rangers, he received a one-game suspension for cross-checking Washington Capitals forward Anthony Mantha in the face in a May 5 game. 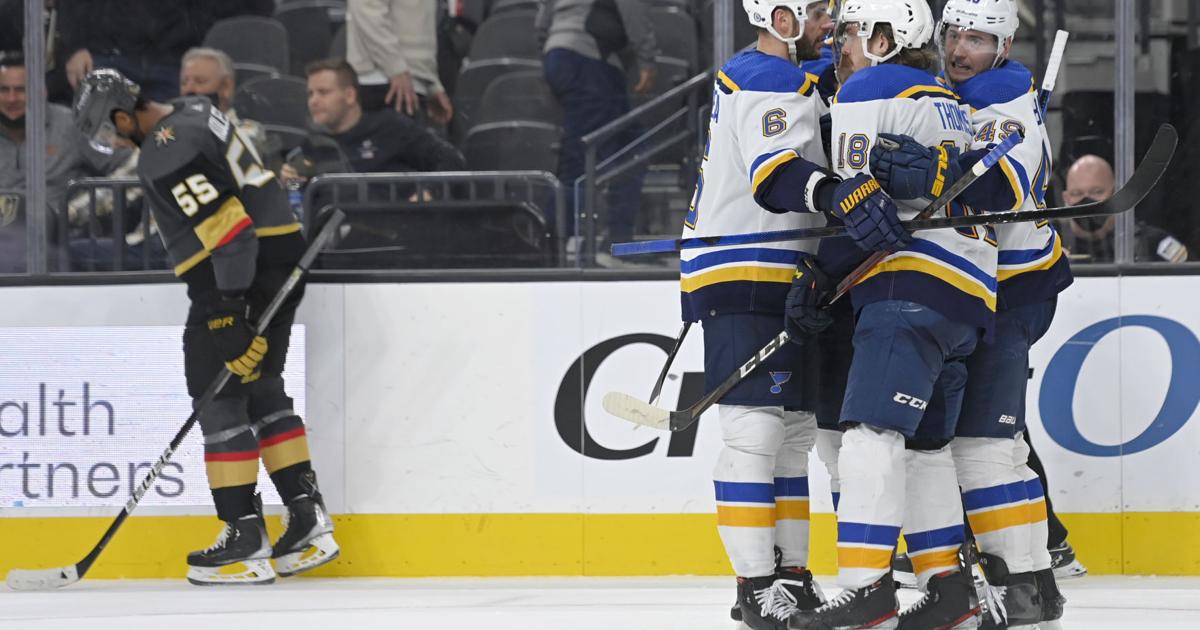 Tarasenko gets the game-winning goal as Blues head home with 3-0-0 record.

LAS VEGAS – You don’t make statements in Game 3 of a hockey season. There’s just too much road to be traveled.
Nonetheless. . .the Blues have won three consecutive road games to start a season for the first time in franchise history. And two of those victories have come against the teams widely considered the best in the West – the Colorado Avalanche on Saturday and the Vegas Golden Knights, 3-1 Wednesday at T-Mobile Arena.
“It's always hard to play in this building,” Vladimir Tarasenko said. “It's also very exciting game, very good atmosphere, very hard team to play against. I think mentally it's a very important win and it's a great road trip for us. We're ready to go home."

With the game in the balance, tied 1-1 in the third period, Tarasenko raced down the ice with Brayden Schenn and Jordan Kyrou on a 3-on-2 rush. Schenn, skating down the slot, passed right to Jordan Kyrou, who feathered a pace across the crease for a Tarasenko tap-in with 10 minutes 11 seconds to play.

It was Tarasenko’s first regular-season goal since last April 26 against Colorado. And his first game-winner since March 7, 2019, against the Los Angeles Kings – yep, all the way back to the Blues’ Stanley Cup year. He now had 36th career game winners, fifth-best in franchise history.

Unlike the Colorado and Arizona games, in which the Blues had trouble holding big leads in the final period, they were strong down the stretch in closing out this one.

The Blues didn’t fall back on their heels. They stayed tight defensively, provided support for each other on zone exits, and had a couple of offensive pushes of their own.

And here they are 3-0-0 and heading back to St. Louis for the home opener Saturday against the Kings.
“I thought we came out in the third and did a good job,” Berube said. “It was just a good game all-around by both teams. It was a real good hockey game. Fortunately we came out on top. And I thought that we did a good job after getting the lead and closed that game out. I think our guys were pretty dialed in.”

At best, the veteran forward will need two negatives tests before he's cleared to play

LAS VEGAS — Blues forward Brandon Saad will be unavailable for Saturday’s home opener against the Los Angeles Kings due to NHL COVID protocols.
The Blues have a fully-vaccinated team, according to general manager Doug Armstrong. Fully-vaccinated players who test positive and are asymptomatic must pass at least two consecutive COVID tests before they are allowed to return to action.
Saad scored his first goal of the season in Wednesday’s 3-1 victory over the Vegas Golden Knights. The team returned from Las Vegas and its season-long 11-day road trip Thursday afternoon.

But it was hard to miss the work of veteran defenseman Marco Scandella. If Binnington was an eraser, Scandella was a neutralizer. He broke up play after play with an active stick. It seemed like every time there was a 50-50 puck in the corners and along the boards, Scandella came out with the puck or got it to a teammate.
In the past, speedier opponents have been able to occasionally beat Scandella wide. But this wasn’t one of those nights. Binnington certainly noticed.

“I really don’t look too far ahead,” Berube said. “I just focus on the game at hand. We started out here, we started on the road, which is fine by us. We got to get away for a bit with the team (in Vail), which is a good thing. And that’s really how I’m looking at it all.”

Chief is absolutely the correct choice to be the leader of the Blues....no-nonsense approach and will speak his mind, ( in as few a words as possible ).....lol 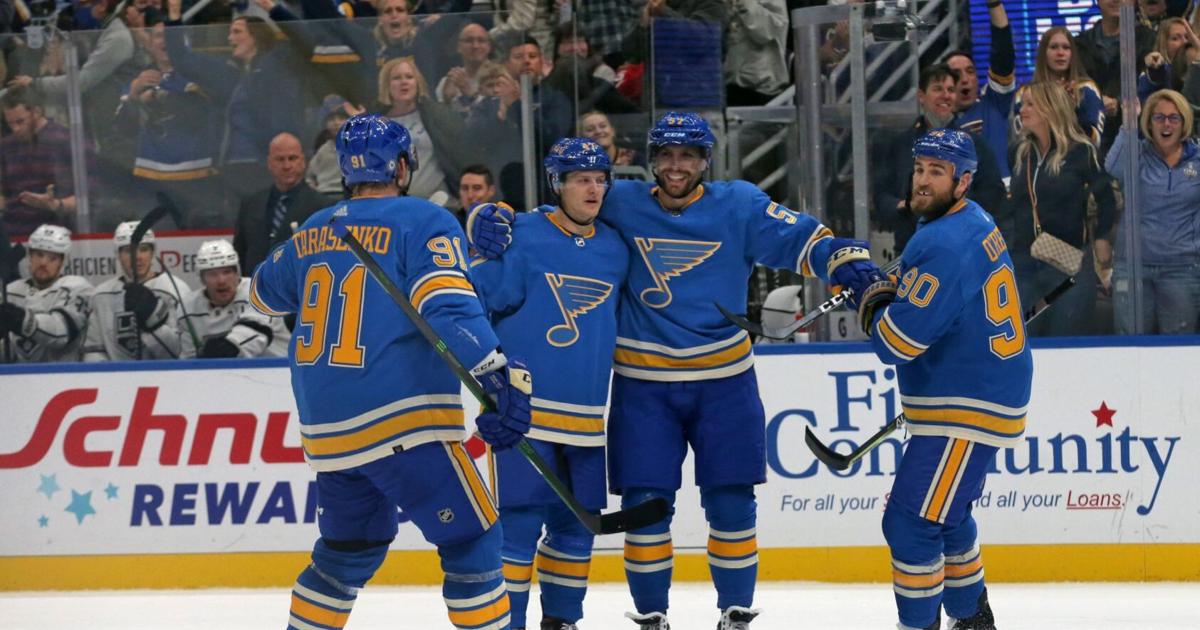 Perron gets a hat trick, Neighbours gets his first NHL goal.

The skating, scoring Blues are 4-0 for the first time since 2017-18 after beating the Los Angeles Kings 7-3 before a raucous sellout crowd of 18,096 at Enterprise Center

Barbashev has scored three goals in a game — he had a hat trick against Detroit on March 21, 2019, the Blues’ Stanley Cup year. But he’s never had goals in three consecutive games. Until Saturday, that is. With the Kings on the power play late in the first period, Marco Scandella swatted the puck out of the neutral zone. Barbashev got a piece of the puck right around the far blue line.
It rolled a few feet away, but Barbashev was able to gain control and then swoop in to beat Kings goalie Calvin Petersen with a wicked backhand to snap a 1-1 tie with 73 seconds left in the opening period.

It was the ninth shorthanded goal of Barbashev’s NHL career, which is now in its sixth season. He had an empty-goal to clinch Wednesday’s 3-1 victory over Vegas, and scored a five-on-five goal in Monday’s 7-4 triumph at Arizona.
So three games and one period into the 2021-22 season, Barbashev was just a power play goal short of a hockey “grand slam” — with a five-on-five, shorthanded and empty-net goal. 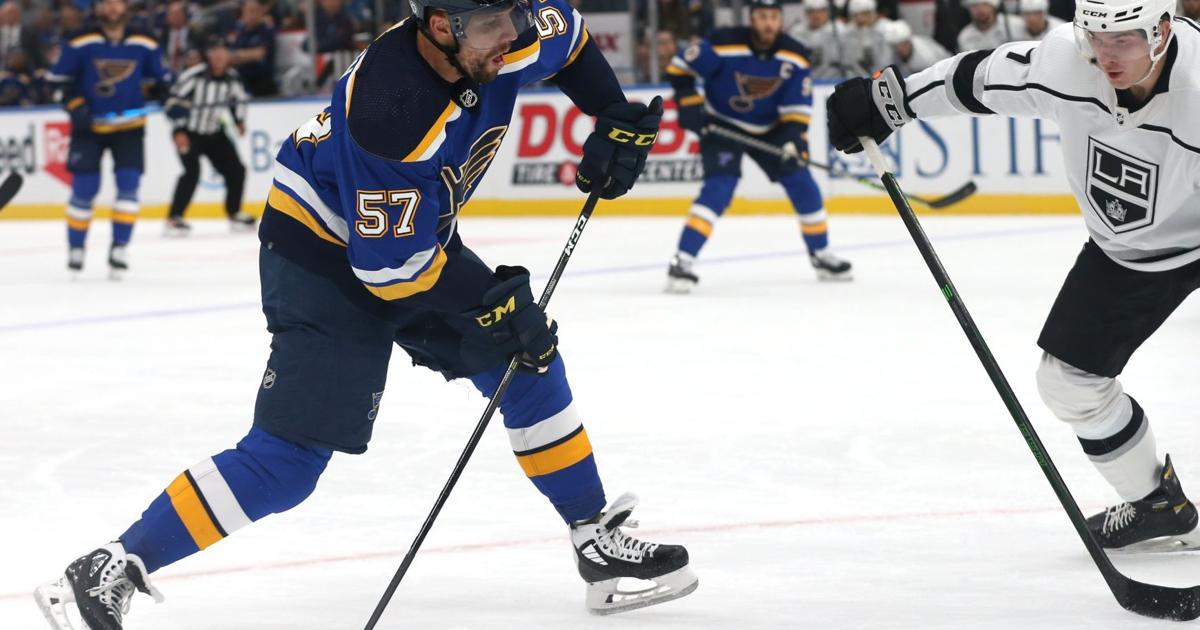 Husso has a shutout as Blues defeat Kings 3-0.


It was tougher. After scoring 22 goals in their first four games, the Blues and Kings were tied at 0-0 going into the third period, where Vladimir Tarasenko put the Blues ahead 3:08 in on a nice slalom drive to the net and added a second on a breakaway with 4:29 to play as the Blues went on to a 3-0 win to become the first team in franchise history to start the season 5-0. David Perron added an empty-net goal with 1:15 to play.

Ville Husso got his first start of the season in goal as the Blues gave Jordan Binnington the night off after going the full 60 minutes in the first four games and posted his second NHL shutout, stopping 34 shots. Husso was plagued last season by giving up goals on one of the first three shots he faced in eight of his first 13 games, though none of his final four, which included a shutout in his last game of the season.
Husso was solid from the start on Monday, even if he didn’t face a shot on goal until midway through the first period. He stopped 10 shots during the Kings’ three power plays.

The Blues look rock solid and are playing at a high level.......Could be a repeat of that magical season that brought the Blues their first Stanley Cup.... 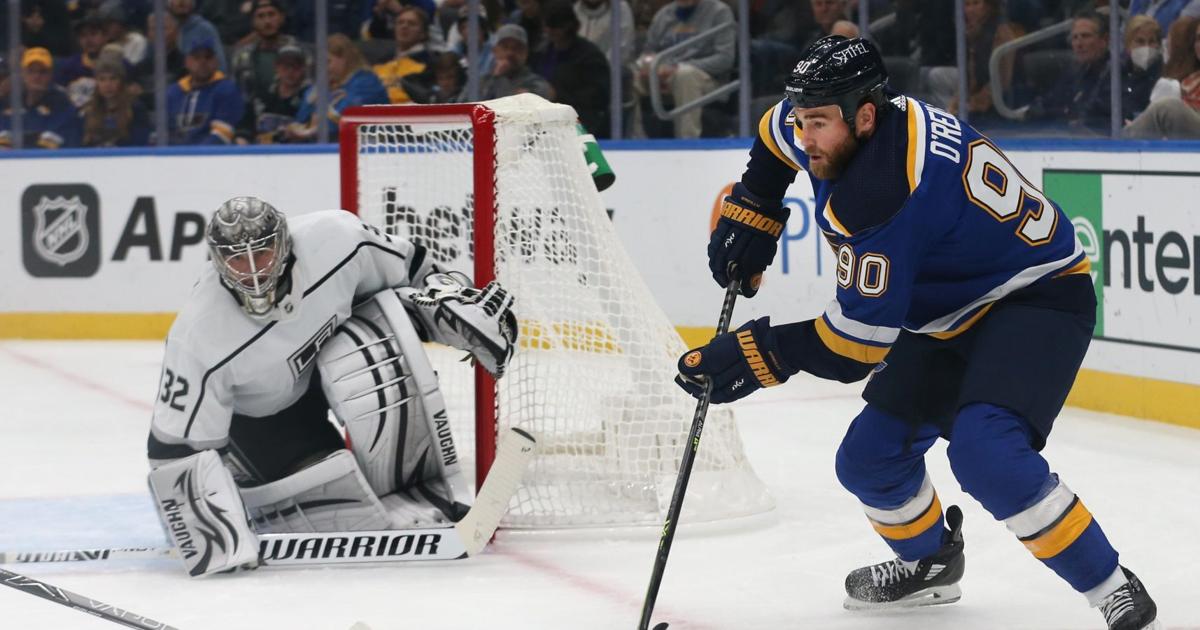 Captain will miss a minimum of 10 days; Dakota Joshua called up from Springfield of AHL.

Just when seemingly nothing could go wrong for the unbeaten Blues, the team showed up for work Tuesday morning and learned captain Ryan O’Reilly had been placed on the COVID list.
“It’s obviously not very good news for O’Reilly, his health, and the team,” coach Craig Berube said. “It’s something that’s an obstacle that we’re going to have to deal with. Just like we had to with Saad.”

Berube said he learned the news on O’Reilly when he arrived at Centene Community Ice Center for Tuesday’s practice.
“Obviously it’s upsetting and surprising at the same time,” Berube said. “It’s not something you want to hear, that’s for sure. But again, we’ll deal with it.”

O’Reilly routinely leads the team in ice time among forwards. He kills penalties, plays on the power play and is one of the best faceoff men in the NHL. So replacing him won’t be easy.

General manager Doug Armstrong told the Post-Dispatch last month that the Blues were 100% vaccinated. So to now have two players on the COVID list just five games into the regular season is both frustrating and indicative of the fact that COVID can be unpredictable.

Colton Parayko with the goal and assists to Scandella and Tarasenko............

blues a step slow this period and are taking too many penalties...

pruman91
Scheen scores for Blues to make it 3-2

next game Saturday at home versus the Blackhawks.....

Binnington with the shutout and named # 1 star

marc Andre-Fluery played a whale of a game but was beaten by Tory Krug one-timer for the goal...