Tom Timmermann
Colorado defenseman Josh Manson knew he had an instant to get in position to make what may well have been the most important save of Game 6.
In the second period, Jordan Kyrou had the puck and Colorado goalie Darcy Kuemper was out of his net and not getting back. As Kyrou moved into position to get a clean shot, Manson slid in and blocked the shot, saving a sure goal. If it goes in, the Blues are up 3-1 and Colorado has a deeper hole to dig out of to get back.
“Well, there was a bit of a panic, to be honest with you, because they made a good play,” Manson said. “Once it went to Kyrou, I knew he was a really patient player and I had a feeling he was gonna hold on to that thing and once I saw him take the step, I just was hoping that it hit me and I think if that one goes in, we're still a resilient team and are still gonna bounce back, but it was nice to get that one.”


“They threw it back down and he showed good patience,” Kuemper said. “I tried to get over there as quick as I could but he held on to it. Manse came up with a heroic block there and the puck found its way back to me.”
“You look back on it now,” Avalanche coach Jared Bednar said, “and you see how tight the game is. Their power play is scary. Give the Blues credit. I look at that team and playing against them, they’re a really good team and they start zipping that thing around, they’ve got some skill and all of a sudden, the net is open, they’re going side to side and (Manson) comes sliding through there and makes a huge save. One of the biggest of the game and keeps us within striking distance. That is the type of desperation and sacrifice that you need from your guys to win at this time of the year. It’s sort of fitting that we were able to get a play like that.”
#602
May 28, 2022 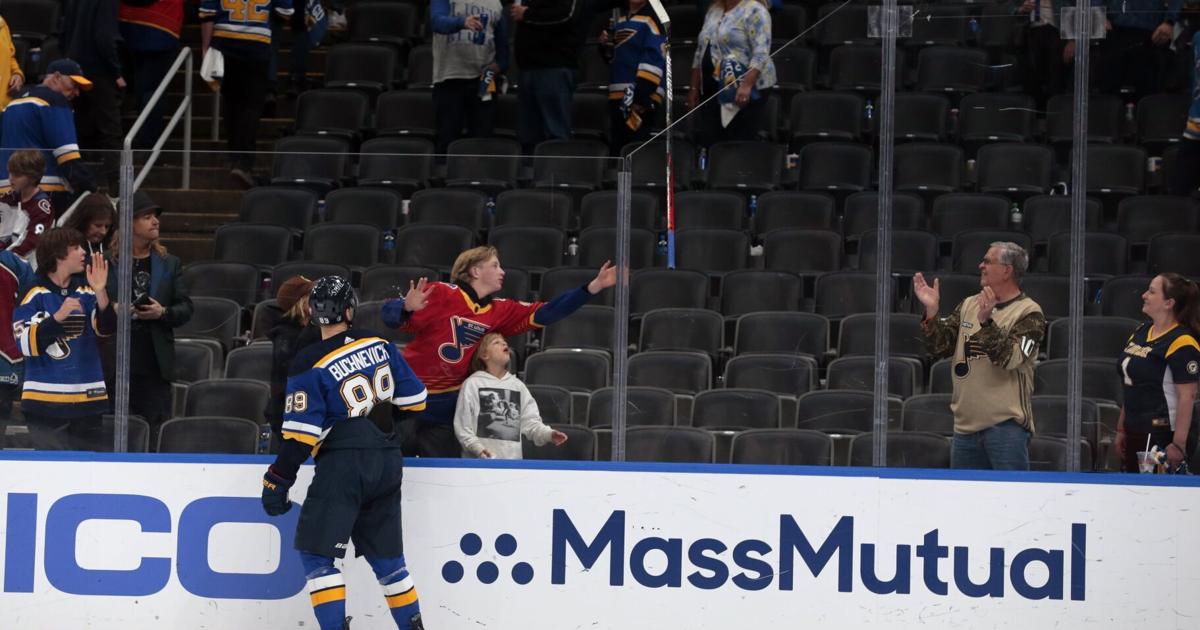 Whether it was Binnington or Husso in net, the Blues were going to have to score to keep up with Colorado. Their dynamic offense underdelivered.

Ben Frederickson
They made the Avalanche earn it, and considering the circumstances, that is admirable, but earn it the Avalanche did in the end.
The Blues’ magic from their unforgettable Game 5 comeback in this second-round series against Colorado officially expired Friday night during the final six ticks of the clock.
A game-winner from Darren Helm — as no one but Helm's family and close friends could have predicted — made it 3-2, sent Blues fans grumbling toward the exits and rewarded the Avalanche for all of that ice they tilted toward the Blues for so much of this series.
The wackiness of overtime didn't get a chance to intervene this time. That cold, hard math finally added up. The lesson: When you give a team this dangerous so many chances over a best-of-seven series, a team this dangerous is going to beat you.

The Avalanche, predicted by many to lift the Stanley Cup since before the puck dropped on the regular season, move forward no longer carrying that heavy baggage about their second-round flops of the past. If future Colorado opponents don't do a better job of attacking beatable goalie Darcy Kuemper, don't be surprised if there is a parade in Denver. Usually, that would make Blues fans feel a little better. Considering the Avalanche's ownership, probably not.
The Blues will stay home, where they will fairly wonder about what could have been. But they have more to ponder than a controversial injury to their postseason MVP goalie and the absence of defenseman Torey Krug. Blues boss Doug Armstrong has to get to work figuring out how to close the gap with the Avalanche a little bit more. This series was a step in the right direction, after last season's first-round sweep. But another step is needed, and Colorado, unlike Minnesota, is built to last, for one more season at least.
#603
Jun 1, 2022 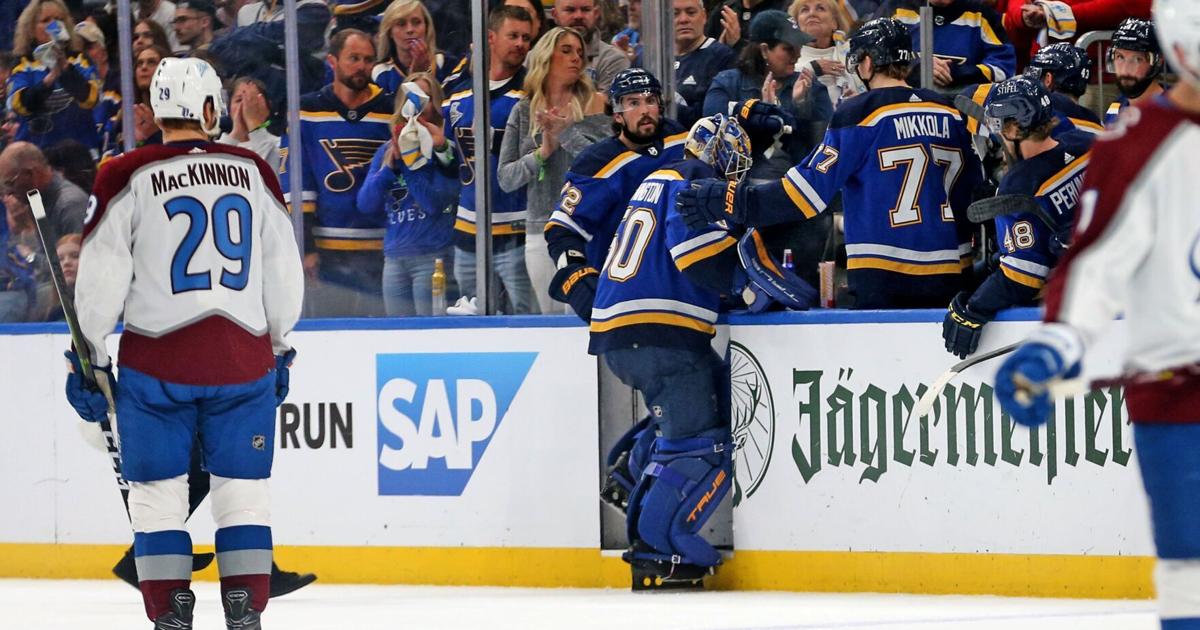 Blues notebook: Binnington says it was a 'God-given opportunity' to throw bottle at Kadri

The Blues goalie explains why he threw an empty plastic water bottle at Colorado's Kadri after the collision that ended his season.

Tom Timmermann
Jordan Binnington’s collision with Nazem Kadri, which ended Binnington’s season, may have been a turning point in the Blues-Avalanche series, and it took on a new dimension after the game when Binnington threw an empty plastic water bottle at Kadri while he did a postgame interview.
On Tuesday, Binnington gave his explanation as to what happened.
“So I went to get my knee checked out in-game,” he said, “I was coming back to the rink, the game just ended, walking down the hallway, couldn’t find a recycling bin on my way down the hallway and right before I walked into the locker room I see him kind of doing the interview there, smiling, laughing and I’m there in a knee brace limping down the hallway.

“I felt like it was a God-given opportunity. I don’t know, I could stay silent and go in the room or I could say something and have him look me in the eye and understand what’s going on, something to think about. I threw the water bottle, an empty water bottle, it landed like two feet from him. It is what it is there.
“I mean, but it is what it is, it’s hockey, it’s a competitive game.”

While Binnington wouldn’t say whether or not he would have been playing in the conference finals had the Blues gotten that far, coach Craig Berube said if there was a Game 7 with Colorado, Torey Krug would have played and he almost played in Game 6.
#604
Jun 1, 2022 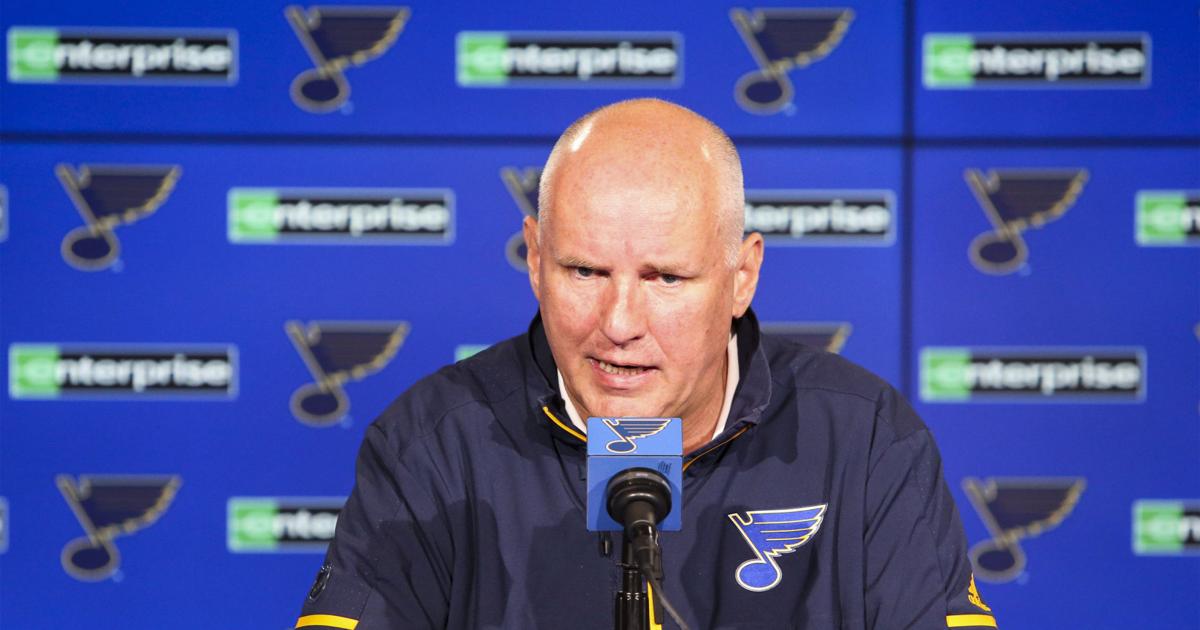 Jim Thomas
With the offseason suddenly here, Blue general manager Doug Armstrong sees a team that needs to improve. That’s always the case when you fall short of the Stanley Cup.
But he also sees a team that’s not far away from being a serious Cup contender, and a team that does not need anything resembling an offseason overhaul.
“It doesn’t need major tweaking,” Armstrong said Tuesday at the team’s season wrapup media availability. “In a cap system, we’re in a really good spot for next season. We have so many returning players under contract.”
It’s basically a three-player offseason for the Blues in terms of free agents: forward David Perron, defenseman Nick Leddy and goaltender Ville Husso. All are scheduled for unrestricted free agency on July 13. With about $10 million in projected salary cap space for next season according to CapFriendly.com, it seems unlikely that the Blues will be able to sign all three.

At least without clearing some cap room elsewhere.
“I wouldn’t say no,” Armstrong said with a laugh. “We’re going to go to work. That’s our job is to try and find a way to bring as many good players into the organization, whether they’re here, whether they’re from the outside.
#605
Jun 3, 2022 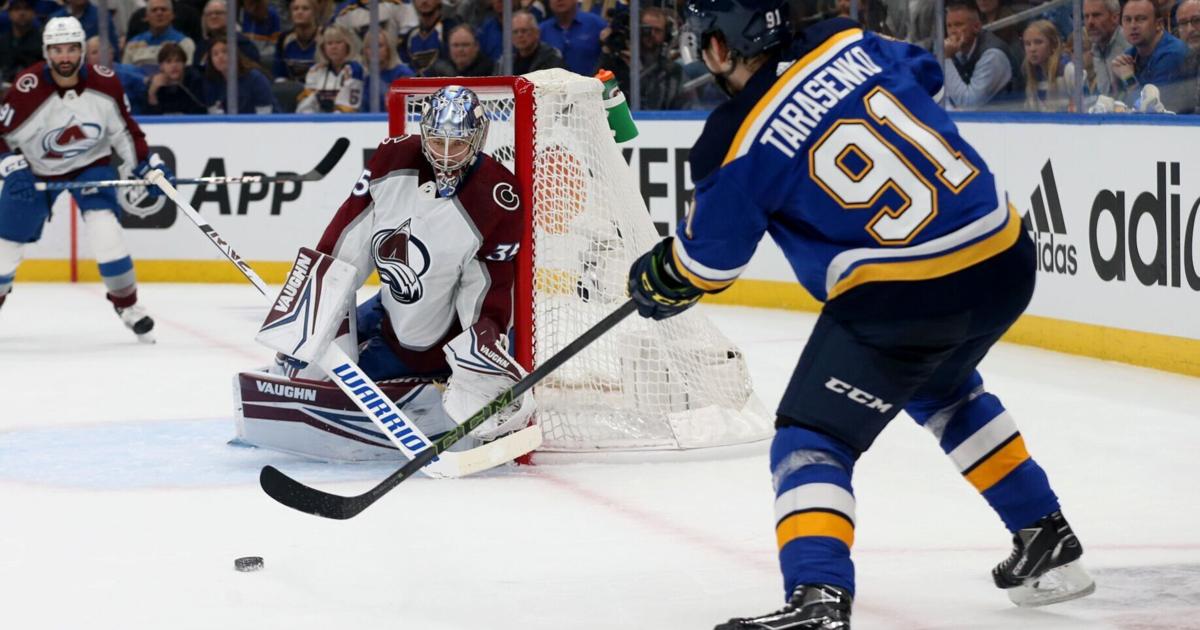 Several forwards, including Tarasenko, Perron and O'Reilly earn strong grades, while Sundqvist and Kostin were disappointments.

Vladimir Tarasenko
A year ago he produced just four goals and 10 assists in 24 games while struggling with chronic shoulder injuries. His camp made a trade request last summer, but GM Doug Armstrong did not honor it. Tarasenko set aside the issue by reporting in great shape physically and mentally. His latest surgical repair finally fixed his shoulder and he roared back to his old form: 34 goals, 48 assists in 75 games for a 90-point pace. He followed that by scoring six times in the playoffs.
Grade: A
#606
Jun 5, 2022 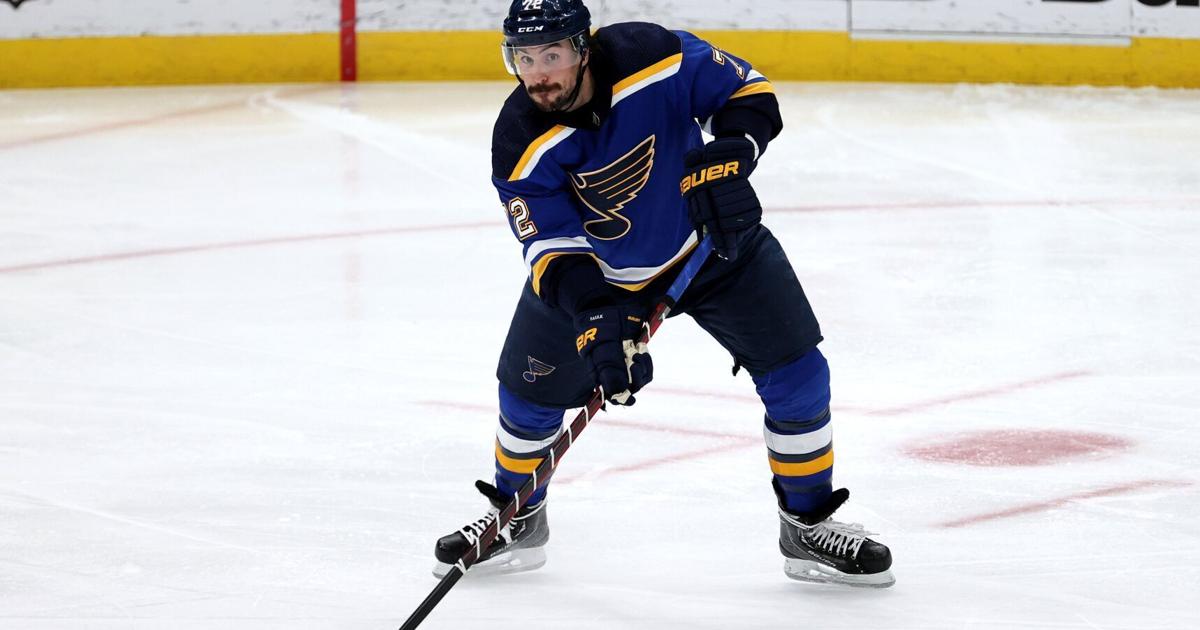 Faulk, Krug and Leddy led the way for a solid Blues defense that was heavily banged up at times.

Justin Faulk
Blues GM Doug Armstrong acquired him as protection against a potential Alex Pietangelo exodus via free agency. Sure enough, Pietrangelo left and Faulk replaced him as the team’s cornerstone defender. He upgraded his offense this season, scoring at a 51-point pace after scoring at a 37-point clip last season. More power-play usage and offensive zone starts helped that process. Faulk still played the body (149 hits) and blocked shots (101) at the other end. His strength 5-on-5 was reflected in his plus-41 rating, and he played nearly 26 minutes per game in the playoffs.
Grade: A+
#607
Jun 6, 2022 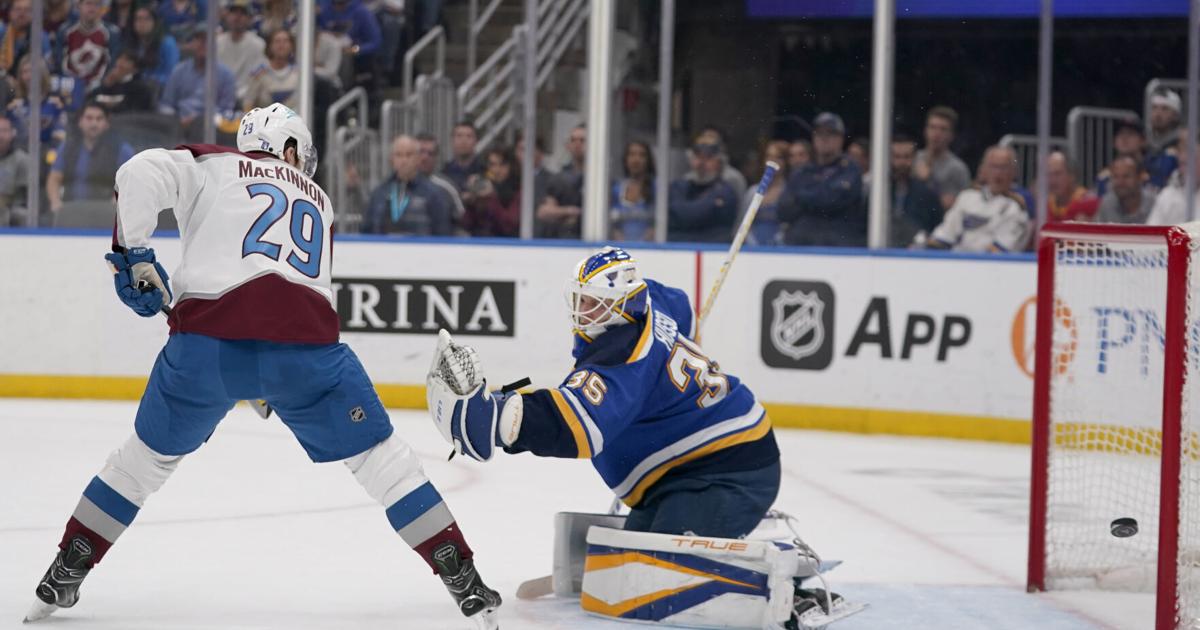 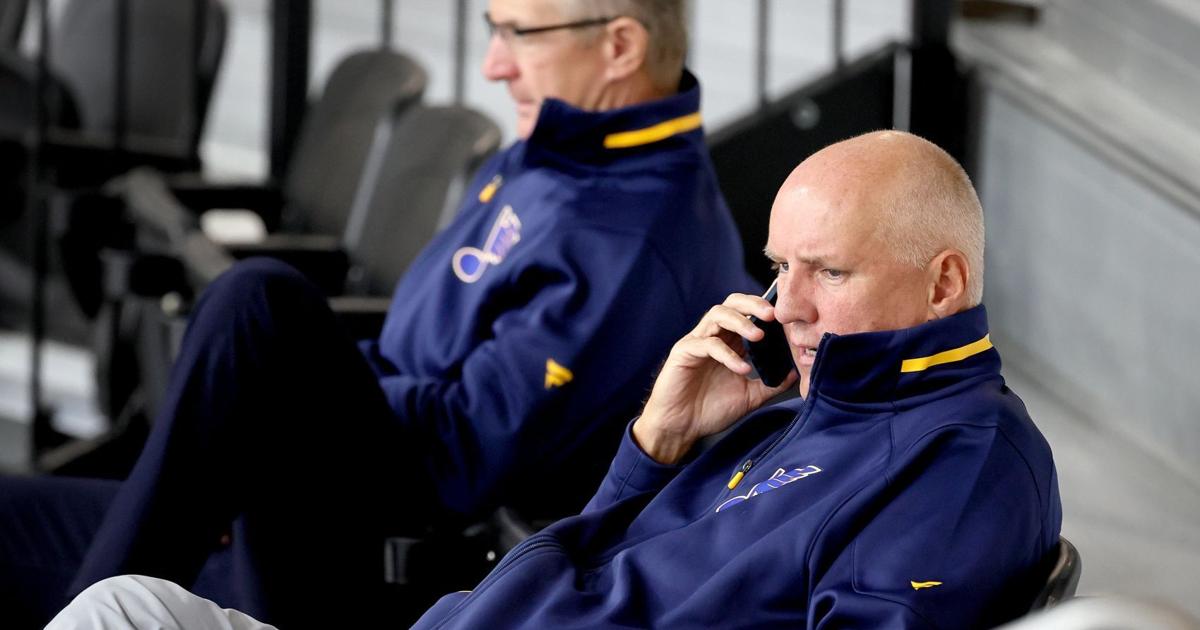 Gordo gives strong marks across the board for Blues coaches and management.