jmwillini said:
Okay. I am old, and counting stats are easy to figure. Wins above replacement??? Baseball Reference and Fangraphs don't even agree what it means If you make Dave Kingman (and others) = to Keith Hernandez at 1st defensively, somehow he would be a very good player. HE WASN"T, he sucked as a player and as a teammate.

Another site that tries to say what a player is worth, Baseball Trade Values, says in a 3 way trade, the Cardinals could get someone named Beer, giving up Goldschmidt and Winn. Would anybody on this site actually make that trade??? Their totals make no sense, but count in salary, but not how close a team is to the cap.

Sure if you are up against a salary cap, maybe you consider that artificial penalty. But please don't tell me that more than 6-8 teams couldn't push towards that total without hurting their talent AND their ability to win. To consider salary into a players trade value to me is a joke unless pushing some artificial barrier.

I keep seeing people saying the Cards can't spend that much. Bullspit. They can, they just don't want to. They are no where near the cap, plus you can push that without a penalty by going above, then below the limit.

Did they spend to get Goldy and Arenado, sure. Of course they got them for next to nothig in players, and the idiot Rockies threw in $50 million, but they are one of the 2-3 worst run franchises in MLB, maybe all pro sports.

Some people say the Cardinals management can't push the cap. Please... They can, they won't.

They can't afford an major upgrade at SS or a #1/2 starter, baloney. Again, they can, with creativity, they don't want to. The make the 1 game playoff and then catch lightning in a bottle is the dumbest business model I have ever seen. Sure it may work once in a blue moon, but not something BIG business would seem to do.

2021, they year everything comes off of the books. So far am $11 Mill pitcher and a resign.

In a way, I feel sorry for Mo, he is doing what he is told. I feel more sorry for Girsch, as he will be the next fall guy.

Maybe Schildt mentioned that he told Shannon that Bill was selling and that's why he was fired, lol... Yes, I am joking, I think.

Please somebody talk me off the ledge. There are good free agents that they can afford that will make them better. Unfortunately, they wont even make an ACTUAL attempt. I am so tired of the "We tried" excuses.

wpr
It is very easy to spend somebody else's money. The from off ice is doing what they feel is prudent. The teams that go over the fake salary cap are typically the huge market teams. In the past few years (22-19) it's been the Yankees 3 times, Dodgers twice, Cubs twice, BoSox, Stros, Phillies and Mets. Despite seemingly unlimited income from National and local tv revenue along with the other sources of revenue there is a reason only certain team venture into the luxury tax realm and then only periodically is because doing so do not guarantee anything little alone a WS appearance. It is not a success model for smaller market teams.

The poorer business model is to try and spend your way to a championship. I read about it back in the 80's and I have said it here a few times, an economist showed that the better business model is to finish second (before the expanded playoff structure.) than to go for the bigger named free agents and win the division. When a team finishes a close second the fans still show up. Still spend the money at the games. The tv and ad revenue remains the same but the overall expenses are less. Thus a better bottom line. The Cardinals pack 3 million butts in the stands ever single year. Bringing in the elite talent will not sell a significant number of jerseys etal to pay for the additional cost of the player(s). They have zero incentive to go higher than their business model projects. Some fans will grumble but people still go to the game or watch it on their cable package. (Insert typical COVID disclaimer here for 22 & 21.)

the juiceman cometh
Cardinals top 10 prospects per the Athletic ($): 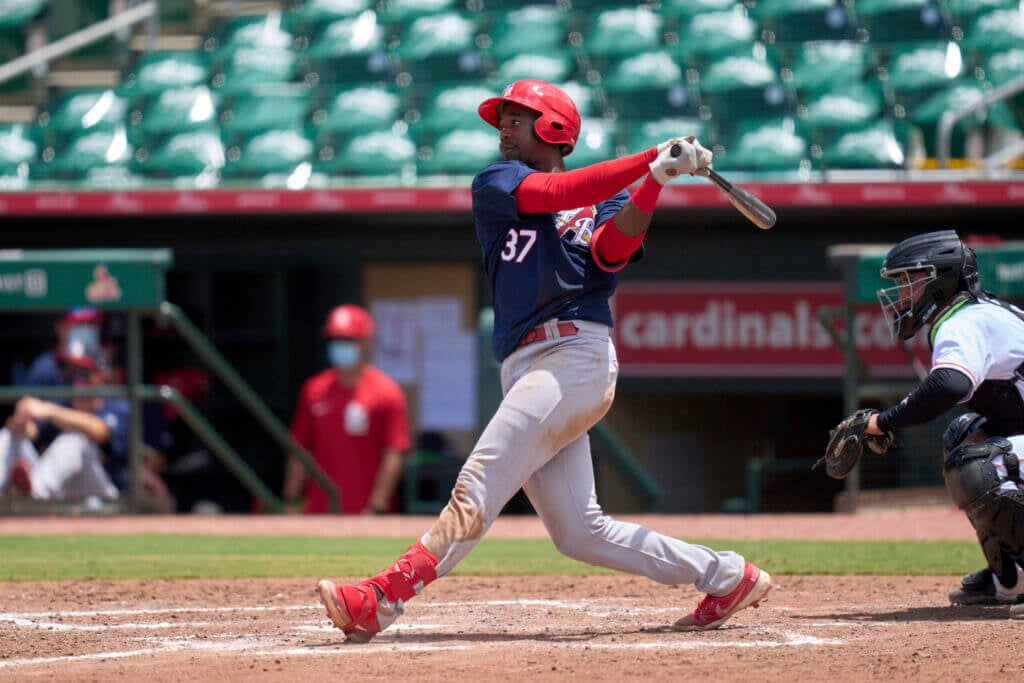 Some intriguing prospects in there. Will be interesting to see how far Winn goes as a 2-way prospect.