Newmark4thFloor
Why are the 3 Illini Predictors now changed to Lead Experts than just experts before? Does anyone have a clue? It increases our 'prediction' chances but why would they make that change? 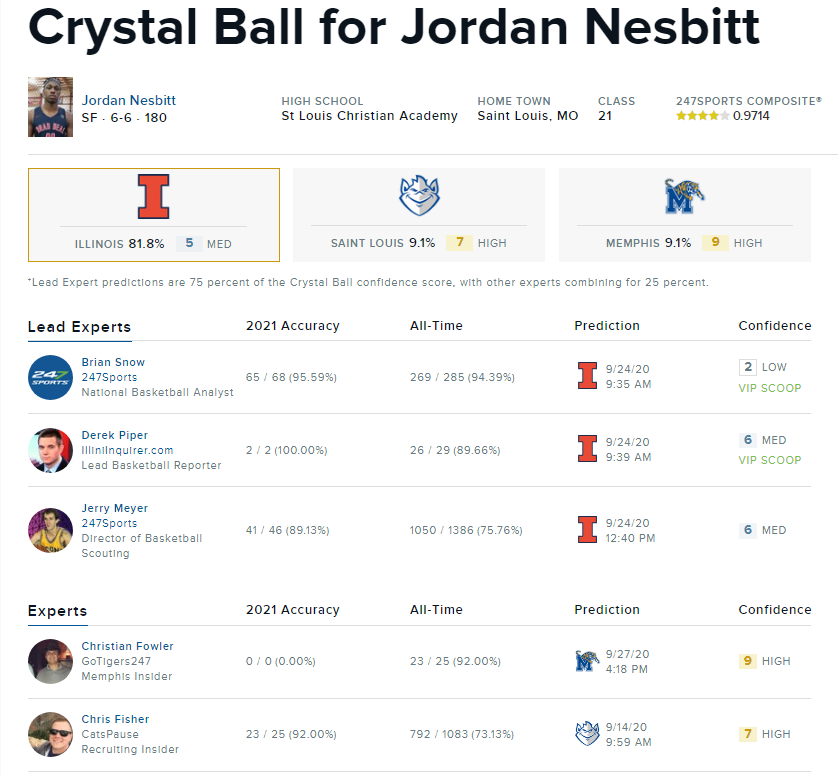 Newmark4thFloor
2 new CB for Memphis with high confidence. Game Over for us ? 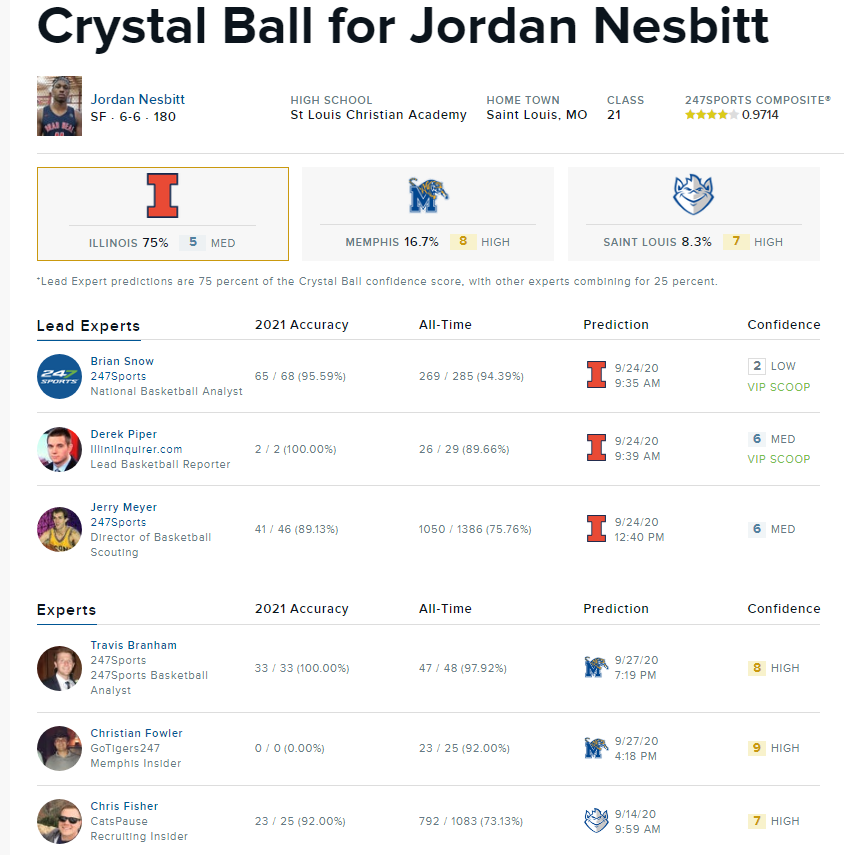 D
DB11Headband
Pay attention to Meyer, Snow, and Piper’s picks here. Nesbitt and Goode going to be a helluva start to the class

Newmark4thFloor said:
2 new CB for Memphis with high confidence. Game Over for us ?

It's not new info. The Memphis guys have liked their chances for a long time. Like I said previously, the kid has made multiple staffs feeling confident. Memphis is the main competition, but we feel confident too. It's not going to be SLU is about the only certainty at this point.
#381
Sep 28, 2020

I hope we get him and may be the favorite. However, you cant go by that. Penny has proven he can land some top level talent and even the #1 player overall during his short time in Memphis.
#383
Sep 28, 2020

Also facing some hefty sanctions because of that, too. That seems to have blown over however. It was supposed to be the first case for the new "Independent Review Team." Much like all other major NCAA violations, it just washed away with the tide.
#387
Sep 28, 2020

Good stuff Thunder, so if Memphis takes Camden on Wednesday and Nesbitt on Thursday, they would be oversigned by 3. Haha, can you even do that?? What a roster Circus Penny has going on down there in Mempiss. Yep, makes you want to just jump onboard.
Last edited: Sep 28, 2020
#389
Sep 28, 2020

I mentioned a few weeks ago that Memphis was pushing. They definitely have some selling points. They have gotten a lot of top flight talent in a short period of time. Penny can relate to players being a former NBA player and recruit top classes. They also have top flight training facilities and play in the NBA arena. The good thing for Illini is that they have players similar to Nesbitt already on the team (Nolley transferred in) and Lester Quinones is coming back. Thursday afternoon cant come quick enough.
#390
Sep 28, 2020

Newmark4thFloor
Guys. Get ready for the roller coaster ride. This Nesbitt train is going to crazy town! SLU CB guy changed it to Memphis. 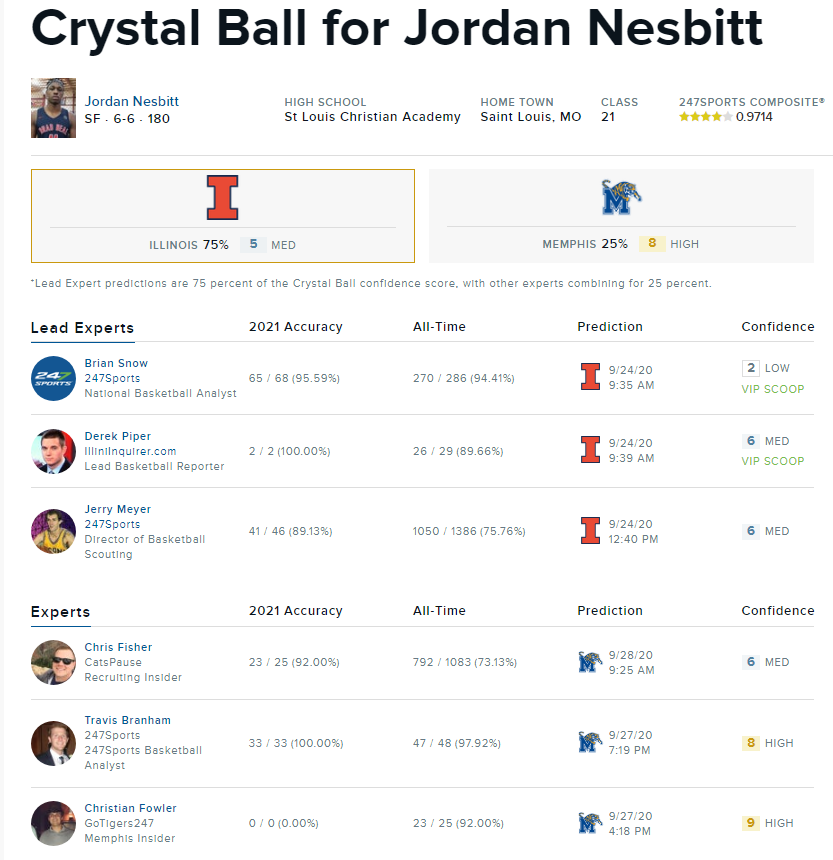 Newmark4thFloor said:
Guys. Get ready for the roller coaster ride. This Nesbitt train is going to crazy town! SLU CB guy changed it to Memphis.

We already know Nesbitt is telling everyone what they want to hear so I'm not surprised to see Fowler come in with a strong CB for his team since Memphis' coaching staff is probably feel relatively confident right now. I'm more concerned that Travis may have gotten wind of some real information that points in Memphis' direction. My guess is that Chris Fisher just flipped after seeing Travis Branham's prediction (they're both Kentucky fans I think) so that one doesn't really phase me at all.
#392
Sep 28, 2020

Q
QCillini48
I was just going to keep quiet but I said from the beginning when SLU was the “clear-cut leader” .. that Memphis was the team to look out for and here we are

But that still doesn’t mean I’m going to get my panties all in a bunch because of some hott-headed premium pay site reporter from Memphis who thinks his team is the Leader!

He’s been saying that for weeks, months even, with nothing substantial to place it on. Bottom-line.


My Sources aren’t bugging one bit. They actually getting stronger as we get closer that confirmation is continued to stay in place that his pledge is indeed going to be to The Beloved

You should know by now that there will always be tag alongs and followers on late crystal ball picks like this. The ones who picked us Nationally, are the ones to watch...

The whole Tipton edits thing does bother me a bit however, and is something to pay close attention to. Penny as a former star-player turned coach, has some pull and reach that is down-right frightening at this level, and I know he has connections in the St. Louis area. From what I’m told, he was using those resources to reach out the Nesbitt’s as recent as this past weekend. Haven’t heard anything else about it however. It’s common practice for Calapari level like recruiters to not go down without a Ma$sive fight! So we shall see...

But I think these late crystal ball picks are more for click-bait than anything else regarding the timing of the crystal ball pick and the Tipton edits announcement. Still nothing substantial or concrete to place those late picks on, because all of that, is in Illinois favor right now...

There’s a lot of smoke in this recruitment at this present time tho and that is admittedly frustrating and alarming.

But when your sources are getting their information from the top dawg... just like 2-3 weeks ago when nobody knew the entire tides of this recruitment had shifted... the circles where my information is coming from knew and are the “types” of circles where this type of information comes out first. Unless you are tight with the family. Which one of them happens to be. So when they tell me nothing has changed except a last ditch effort($) that again feel on deaf ears

Just maintain course in confidence and stay strong that on Thursday, Nesbitt’s choice will be to the U of I!

Until I hear otherwise, just relax and keep calm... it’s all good guys all the way baby!!

C
Calvin
I suppose the usual panic will ebb and flow. That's especially true when there's enough conflicting info to create this much ambiguity on who knows what. No offense to our insiders, but I think I'll keep my cup handy for Thursday. This staff has already pulled off several amazing classes, but it's been a wild ride every year.
#395
Sep 28, 2020

G
Ga65
The best part is that one recruit no longer signals success or failure for the future. Certainly can’t miss on all but this staff has had success even when then waited until spring. Like to get him but it won’t ruin my week. Still think Mac is most important as Hutch, Grandison, and Goode will be solid at the wing.
#398
Sep 28, 2020