Top 9 RB Performances of the College Football Season so Far

In the modern era of football the workhorse running back role has departed to committee approach or an offense with a passing priority. Despite the focal point...

Fighter of the Nightman said:
I do not understand the suggestions for the students in the east BALCONY, personally … seems like a different version of the same issue. Why not put them in the east main stands corner where the overflow is/used to be?

NEZ is practically begging to be a family-friendly getaway zone where groups can spread out and still have it look full.
Click to expand...

You want students to be in a controlled chaos and the only way you can do that is to keep them in close proximity. The East Balcony would be ideal. It was done before. Remember engineering having to check the balcony because it was shaking so much they were afraid it might collapse. Can you imagine that kings of raucousness? It wouldn’t happen with students scattered about East Main.

I know there are season ticket holders with seats in the EB, but those can be grandfathered in to sit among the students if the wish, or the stadium could offer alternatives.
#204
Sep 20, 2022

SampsonRelpenk
Switched my work schedule around to come up to see this one with my dad and uncle—not enough to make the crowd look better on TV but I guarantee we’ll be loud enough to elicit a couple glares from moms and blue hairs.
#206
Sep 20, 2022

SampsonRelpenk said:
Switched my work schedule around to come up to see this one with my dad and uncle—not enough to make the crowd look better on TV but I guarantee we’ll be loud enough to elicit a couple glares from moms and blue hairs.
Click to expand...

Ransom Stoddard said:
I really want Josh back. Call me old school (cuz I am) but I'd love to see some 2 back sets with Brown and McCray. I don't know if that's in Lunney's bag of tricks, but it can create some really interesting wrinkles.
Click to expand...

If he needs any inspiration he can turn on that packers film vs the bears. 2 backing it is kinda what they do.

G
Genesis
It's not something we'll do every play throughout the game. It just enables us to give a greater variety of looks to the D. When we never show two back sets, it eliminates a number of pages from the playbook. With both Chase and Josh in the backfield, the D is forced to make that instant decision on whether the ball was handed off to Josh or if TDV kept it to hand off to Chase going the opposite direction. Get that MLB leaning the wrong direction just for an instant. I'm kinda partial to the triple option too, but that requires giving up a pro-style QB which I'm not in favor of. I like to see some triple option on Friday night and then pro-style on Saturdays.
#209
Sep 21, 2022


Illinois will Win; Chattanooga will Cover; and, the Total will go Over.
Click to expand...

G
GILL-INOIS
Sure each book is different but seeing Illinois -17.5 area of now

Chattanooga is a talented FCS team with experience. We need to stop their run game and force them to pass. QB Hutchinson is mobile so need to keep him in the pocket as much as possible. Main guy that is a threat is RB Aiylm Ford. Guy is 5'9 but solid 215 who can cut and also dangerous in the receiving game. Has 4 rushing TDs and 2 receiving TDs in 3 games this season. Stop the run and cut off the quick crossing/slant patterns.

I can easily be wrong but I don't think this will end up being a close game when all said and done. Chattanooga coming off a short week and Illinois getting extra time to heal(Bryant back). Chattanooga has played Wofford, EIU and North Alabama who are a combined 1-7 with the only win against a Division 2 school. Think two things will have to happen to keep this a close game. Illinois will have to turn the ball over and have a high rate of penalties. Time for Illinois to control the lines in this game.....
#212
Sep 21, 2022

Not sure about this predicted score, but based on spread and over/under it looks more like 28-9, which sounds more reasonable.
#213
Sep 21, 2022

ptgrd23
I want a blowout. 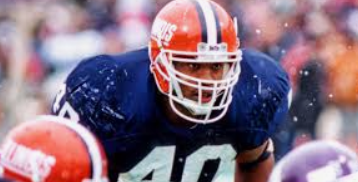 ptgrd23 said:
I want a blowout.

Dana is a regular on campus in the spring to watch #40 on the softball team.
Rumor has it that an even better linebacker will be on campus this weekend: 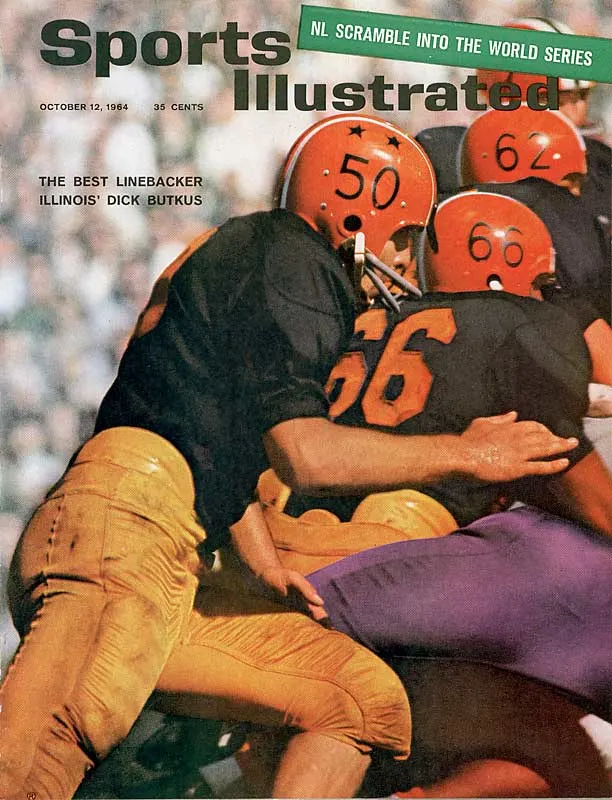 I
illiram11
So excited for tomorrow night! Although we should be 3-0, the future is bright, and we have a real good chance at a bowl this season. Chattanooga is a top tier FCS team, so after some of the upsets I've seen this season, I'm sure the coaches will be sure that the players don't take anyone lightly.

Illini take care of business on a beautiful cool night in Chambana, and Chase Brown may set some records:

Illinois_2_AZ said:
Is anybody else thinking the over/ under of 39 is a little low?
Click to expand...

lstewart53x3 said:
18 point favorites. Puts the projected score around 28-11. Seems about right to me
Click to expand...

One reason I think it might go higher, is if we get a nice lead by midway through the 3rd quarter, a lot of points could be scored once the subs get in the game. I also think we have fewer turnovers, which equals more points.
#221
Sep 21, 2022

ptgrd23 said:
I want a blowout.

Yes! I've been craving the "when available/when supposed to" blowout for years. Entirely sick and tired of all those times when we could have one (not often), but then hearing some bs about how we"re "gentlemanly" and respectfully take our foot off the gas. That's so "excusionary" it's gross, and even if true in any way (which is completely absurd to adhere to), it's still a joke. We are not, and have not been forever and a day, a football program that is so stout we need to show anyone how "magnanimous" we are. All while we suffer several 60+ point beatdowns from better programs. When the opportunity presents, do not be afraid to dish out a blowout!
Last edited: Sep 21, 2022
#222
Sep 22, 2022

Fighter of the Nightman
Saw on social media that student ticket “sales” are at 9k … obviously not all will show, but we only need like 23k others to buy tickets to beat the UVA attendance…? Come on, folks!
#224
Sep 22, 2022 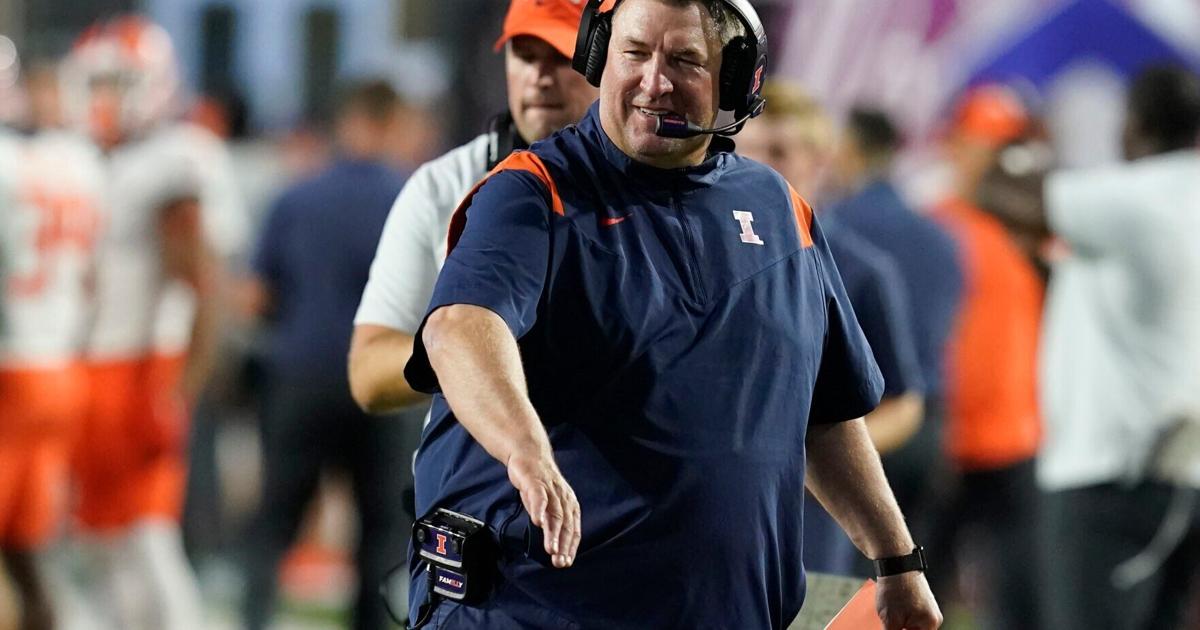 Illinois is trying not to be a victim of an FCS upset like its in-state rival Northwestern.

CHAMPAIGN — If the Illini haven’t yet gotten a warning about “buy games” against FCS opponents, then they got one last weekend.
Northwestern paid Southern Illinois $550,000 to play last weekend as a cupcake out-of-conference game. The only problem was the Salukis upset the Wildcats 31-24.
Illinois (2-1) hosts Chattanooga (3-0) on Thursday in a similar matchup.
“Obviously, that’s an easy one to kind of serve up that it happens, but I don’t coach Northwestern and don’t worry about Northwestern except one game out of the year,” Illinois coach Bret Bielema said. “It is a constant reminder, and not just FCS, anybody can get anybody on any given football (game) right now in the world that we’re living in with (the) portal and guys playing at a higher level.”

Nonconference college football often puts up these kinds of upsets in buy games. Appalachian State earned $1.5 million to come and upset ranked Texas A&M this season as well.
Illinois paid a little over $1 million to play UTSA last season, and it got an introduction to its offensive coordinator Barry Lunney Jr. and a 37-30 loss for its financial contribution to the Roadrunners athletics department.
Safe to say the Illini are on high alert for their final nonconference game. The Mocs are the 10th-ranked team in FCS and have put up at least 30 points in each contest. Chattanooga also gave Illinois all it could handle on the basketball court last March in the first round of the NCAA Tournament with the fourth-seeded Illini avoiding an upset to the 13-seed Mocs with late free throws.

Whenever I see this word, I think of this guy: