Epsilon said:
At this point, everyone left that can help is screwing us. Edit: Pitt is down, MTSU is down, TAMU is down, and Kansas is down. WTF?
Click to expand... 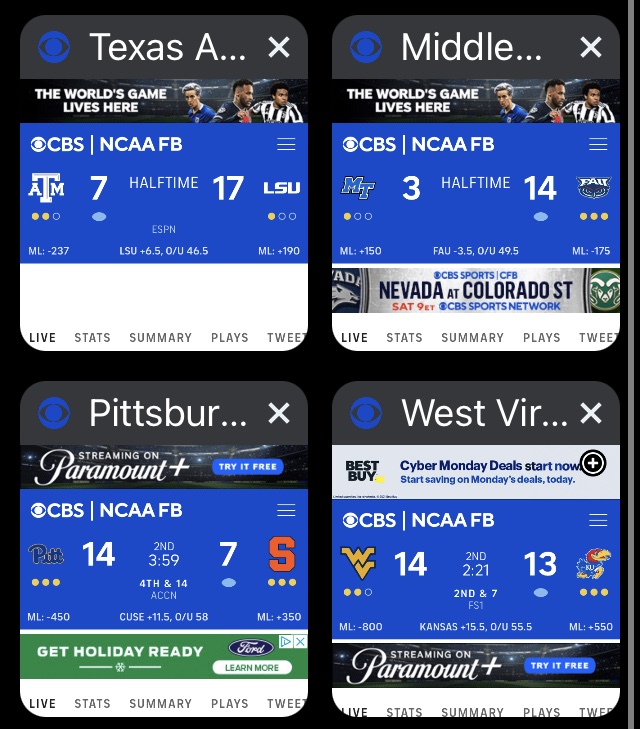 Agreed. Pitt pulled ahead, but there’s no excuse for that A&M score. Kansas is trying to keep it close at least! A lot of football left still, but I’m getting nervous.

Honestly, though, after this afternoon’s games, I think our chances dropped to zero. We’re gonna need some help from the new APR scores.
#102
Nov 27, 2021

ChiefGritty
Other results could hardly have gone worse for us today, but honestly, ending this season on a high but still hungry, with all of the coaching staff's focused toward the coming transferpalooza is not a bad outcome at all.

TMC999
I don't think I've ever seen this much football-related prognosticating and forecasting that didn't involve a flight tracker and Willard Airport...
#104
Nov 27, 2021

ChiefGritty said:
Other results could hardly have gone worse for us today, but honestly, ending this season on a high but still hungry, with all of the coaching staff's focused toward the coming transferpalooza is not a bad outcome at all.

I don't want to say it's better than 15 practices and a nothing bowl...but one could.
Click to expand...

I told my wife that I felt the exact opposite was going to happen: every scenario we needed in the games being played today was going to come to fruition, but Illinois would lose.

If we can’t go bowling, I’d rather it was the way it appears it’s going to be than the way I feared.

TheChief4Life said:
You are correct. This is in regards to Cal and USC (I think the other poster typed UCLA and meant Cal). Cal and USC are both 4-6. They play against each other next week. We would like them to both be 4-7 heading into that matchup, and absolutely do not want them both to be 5-6.

It didn’t help that I read it as “Cal” also.

Too many freaking teams in that state, and my indifference towards all of them is interchangeable. I did mean to type Cal and USC.
#106
Nov 27, 2021

TMC999 said:
I don't think I've ever seen this much football-related prognosticating and forecasting that didn't involve a flight tracker and Willard Airport...
Click to expand...

You must not have been around in '07/'08 when we were all suddenly experts on BCS rules when we realized we had (and eventually capitalized on) an outside shot at the Rose Bowl.
#107
Nov 27, 2021

RedRocksIllini said:
LSU seems like the most likely team to turn down a bid, imo.
Click to expand...

RedRocksIllini said:
LSU seems like the most likely team to turn down a bid, imo.
Click to expand...

redwingillini11 said:
Ok so we need USC and Cal to not reach 6 wins and hope a team or two declines the bowl?
Click to expand...

Well.... the dream is over. The chart doesn't show it quite exactly, partly because I miscounted and partly because I messed up two games, not realizing that bowl spots were going to be taken regardless of who won a game (I did recognize it for two games, but not for two others). Case in point, the Florida/Florida State game. I knew we wanted Florida to win, but forgot that even if Florida won, we'd still lose a bowl spot. Long story short, the number of bowl spots that actually remained viable for Illinois started lower than 8 (more likely 5.... I'll have to figure out how I messed up that counting at some point). So, we needed quite a bit more praying.

Regardless, here's the current table:


If both Cal and USC win on Saturday, then one of them is guaranteed a bowl invite. If they both lose, then neither will receive one. If only one wins, then we will be rooting against that team next week. For this week, let's just root against both.


Now, let's talk reality. At this moment, there are actually 83 bowl eligible teams. It felt like every 5-7 team that needed to win today, did... and that was super frustrating. In order for Illinois to get to a bowl at this point, this is what has to happen:
- Two or more of the bowl eligible teams need to decline invites. This is unlikely, but has happened, and there's some speculations that a couple teams may do it.
- Either Hawaii doesn't file a petition or the NCAA denies it if they do.
- Rutgers and Texas decline their bowl invites (as 5-7 teams). Texas has cause to do this, but I don't know why Rutgers would.
- Neither Cal nor USC get to 6 wins.

H
Hopingfor500
That was seriously an awesome job keeping up with that. Fun that we could follow it until the end. Looking forward to getting to the 6 wins next year, a couple of weeks earlier, so that it's a matter of where, not if.
#124
Nov 28, 2021

Illinir1
Rutgers playing Maryland for a bowl spot really hurts. Should have beat both in Champaign. Definitely should have beat the worst points-allowed defense in the B1G, Maryland, who now has our bowl spot (along with Locksley and Zook).

Still, very happy with the progress and believe we've got a head coach who will bring success to Illinois Football.
#125
Nov 28, 2021

I
Illini Farmer
To play the what if game - what if we would have won those tight games with Purdue, Maryland, and Rutgers? We would have been 7 and 2 in the league and a blown fourth quarter lead by Nebraska against Iowa away from a big ten championship game appearance. You obviously can’t do that as we could have easily lost the PSU game or even the Nebraska or Minnesota games, but it is fun to think about. Good progress this year and we have the right man in charge. We did benefit from an easy crossover schedule that did not include osu, msu, or mich.