wpr said:
What a difference winning makes. As far as who is in the playoff rotation, I don't care if it hurts someone's feelings. I wanna win with the best players available. Happ and Lester are not long term solutions anyway. In reality it may not matter. A 1 game elimination against the Dodgers or Giants will probably have Waino on the bump. If he can't go it might be Kim. After that I would consider the "crafty veteran" and consider Lester going 4 innings.
Click to expand...

Flaherty will start game 2 of the doubleheader tomorrow night but he's expected to pitch just one inning and not much more than that.

As far as the elimination game, that's going to be Wainwright. Had they had to go all the way to the final game of the season to clinch, then he would have been scheduled to start the final game of the season. What could be more interesting is who the Dodgers or Giants have pitch in the wild card game if they have to go to game 163 to decide the NL West (which would be played in San Francisco).
#503
Sep 23, 2021

wpr
I've been laughing at some Brewers fans who are friends on another board. They're a little huffy. From their perspective it was ok to laugh when Milwaukee swept StL. Now it's not.
#504
Sep 23, 2021

IlliniFaninHoosierLand
I mean...he's not wrong:

IlliniFaninHoosierLand said:
I mean...he's not wrong:

I like the humor on that quote. I also heard the players rallied since waino has done that for the team much of season, so repayment of sorts. Either way, they seem to have a little extra juice today.
#506
Sep 24, 2021 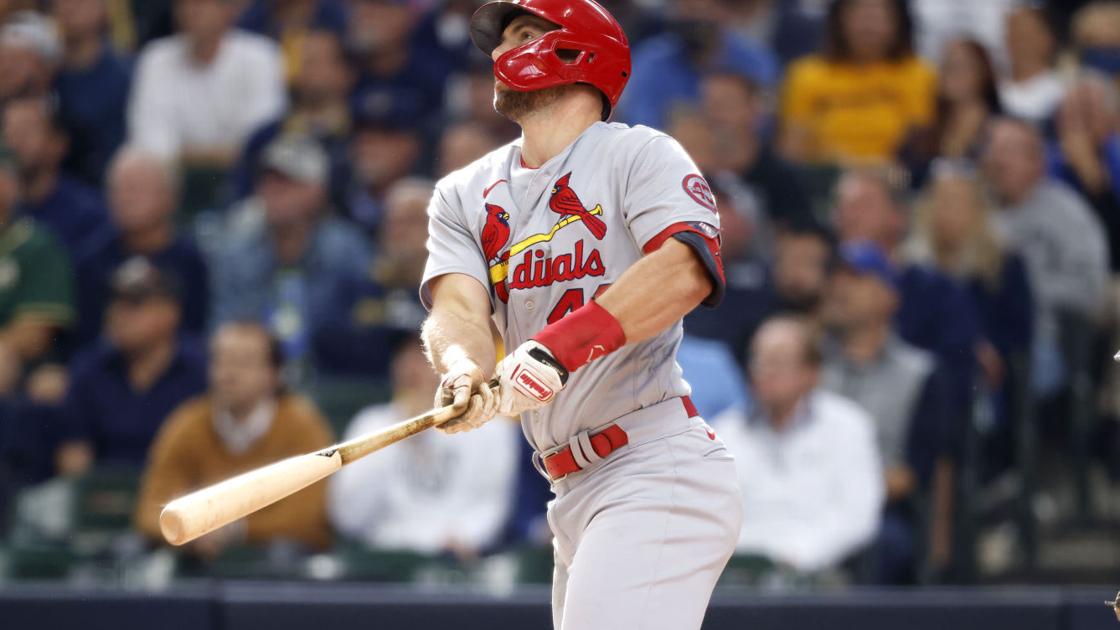 Cardinals score eight unanswered for 8-5 victory. Wainwright gets his 2,000th career strikeout but abbreviates his start.

MILWAUKEE — It has been almost two weeks since the Cardinals looked up at the end of a game to see themselves on the downside of the score. In that time new roles have solidified, familiar swings have awakened, and the wild card race has become what happens when the old tortoise, so slow and steady all these months, realizes it can run like a hare.
It’s been so long since they felt what it’s like to lose they have, evidently, forgotten how to do it.

Down by five runs off their best pitcher before they got a runner safely to second base, the unflinching Cardinals rallied to score eight unanswered runs, seven in the final three innings and three from Paul Goldschmidt’s two homers to shock the first-place Milwaukee Brewers, 8-5. The win Thursday at American Family Field completed a four-game sweep by the Cardinals and extended their winning streak to 12 games, the longest for a Cardinals team since 1982. Only the 1935 Cardinals have had a longer winning streak, at 14.

“It’s hard to stop when you’ve got mojo like that,” starter Adam Wainwright said. “Earlier in the year, when we got down one or two runs you could feel the air leave the building and everybody go like, ‘Man, this is going to be really tough.’ It’s definitely a vibe of … we’re about to tie this game right here. This game is not over. That’s a good, good, good feeling to have right before postseason. When a team starts clicking like that it can be real fun.”

Is Nolan looking OK? I just read an article that was anticipating the worst. I saw that he played today. I thought he played yesterday too.
#514
Sep 24, 2021

pruman91
He's fine.........Made a webgem play on a slow roller down 3rd base line and got runner by a step........he played yesterday and was taken out b/c of lower back tightness but showed no ill effects today...

Sosa struck on the right hand by a pitch in the sixth inning and rushed off the field. Team can match franchise's consecutive wins record in nightcap.

CHICAGO — The win that put these Cardinals on the brink of history the Swifties did not reach and Whiteyball never matched may have come despite a significant loss.
The hard-charging Cardinals won their 13th consecutive game by holding fast to a shrinking lead and downing the Cubs, 8-5, in Game 1 of a doubleheader Friday at Wrigley Field. The Cardinals can match the club record set in 1935 for consecutive victories with a win in the nightcap. A rousing victory that included the 30th home runs of the season from Paul Goldschmidt and Tyler O’Neill turn a frightening turn in the sixth for shortstop Edmundo Sosa.
Sosa was struck on the right hand by a fastball from Cubs reliever Tommy Nance.

He wheeled away from the plate, cradled his right hand in his left hand, and as a trainer came out to meet him, Sosa dashed past the trainer and straight into the Cardinals dugout. That revealed his feel for the severity of the injury. He presumably rushed to the clubhouse from there.

Sosa had X-rays at Wrigley Field and met with the Cubs' team physician on site. After the game, manager Mike Shildt said the initial scans were encouraging and did not reveal any fracture. He will have to be re-evaluated in the coming 24 hours.

A day after hitting two homers to rally the Cardinals from a five-run deficit in Milwaukee, Goldschmidt started the Cardinals’ scoring with a two-run homer in the third inning. He joined Nolan Arenado as the two Cardinals with at least 30 homers. Two’s company for about two innings. That’s when a third Cardinal cleared the crowd to join them. O’Neill’s two-run homer in the fifth inning landed somewhere beyond the left-field bleachers – an estimated 454 feet away from home plate.

Illwinsagain said:
Is Nolan looking OK? I just read an article that was anticipating the worst. I saw that he played today. I thought he played yesterday too.
Click to expand...

Yeah him getting removed from the game Wednesday night for the back injury was more just for precautionary measures. He woke up fine Thursday morning and said he could play.
#520
Sep 24, 2021

BillyBob1 said:
What did they say about Sosa?
Click to expand...

IlliniFaninHoosierLand
To tie the record is great but to do it in a doubleheader sweep at Wrigley makes it that much sweeter.

Cardinals magic number to clinch the 2nd wild card down to 4.

Crazy to think that about a month ago, most Cardinals fans were thinking they'd be playing meaningless games the last week of the season because they were eliminated from playoff contention.
#525
Sep 24, 2021