wpr
The Post Dispatch has an article on the minor league players St Lou traded away.

ELEHURIS MONTERO
The player in this deal with the most obvious physical talent is 22-year-old 3B/1B Elehuris Montero. During the regular season, he averaged just shy of 2.5 pitches per plate appearance ... From a hitting talent perspective — the bat speed, primarily — Montero has everyday upside, but corner bats with approach issues are terrifying prospects.
MATEO GIL
20-year-old SS/3B Mateo Gil and righty Tony Locey are the two prospects with the most potential for physical and technical growth.
TONY LOCEY
He struggled early in his college career but toward the end of 2019 Locey would hold mid-90s velo late into games, hitting 97 regularly and landing a solidly average breaking ball that dev-minded folks in baseball think has more ceiling.
JAKE SOMMERS
He might seem like a throw-in, but his power fastball-slider combination gives him a chance to impact a big league bullpen eventually.
Click to expand...

Ryllini
Looks like Dex is close to being moved to the Angels in a salary dump. Making room for Ozuna?
#79
Feb 4, 2021

wpr
It's funny. St Lou along with most of MLB goes along for months and months with no activity then in a week's time the flood gates opened up.
#80
Feb 4, 2021

Ryllini
Looks like th Cards will be paying the bulk of 14 mil and will receive a player to be named later or cash. Maybe they will send Trout

Ryllini said:
Looks like th Cards will be paying the bulk of 14 mil and will receive a player to be named later or cash. Maybe they will send Trout

IlliniFaninHoosierLand
My guess is that this means that the OF will be Carlson, Bader, and O'Neill with Lane Thomas probably getting a good chunk of playing time as well.

It also sounds like rookie OF Justin Williams, who they got as part of the Tommy Pham trade, will get a shot for an opening day spot as a left handed hitting option.
#84
Feb 5, 2021

the national
Mo, what are you up to?

. Awfully curious how the roster will look on opening day. Seems like the ice dam is breaking. I bet we’ll see some other significant movement.
#85
Feb 5, 2021

wpr
If any of y'all like the math behind the deal, here's the nuts and bolts art of the trade.
The Arithmetic of the Arenado Trade

It’s been a week since news first broke that the Cardinals were closing in on a deal to acquire superstar third baseman Nolan Arenado from the Rockies. The process to work around Arenado’s contract was so complicated that it took three more days of negotiations between the Cardinals and Rockies respective braintrusts. It included a series of mandatory approvals from the league, player’s union, and Arenado himself, as well as several alterations to Arenado’s contract. Once the deal was announced, casual fans and even a few pundits were vexed by the imbalance in the Cardinals’ favor in the deal. Words like “fleeced” and “swindled” dotted descriptions of the trade. While there’s a lot of truth to that notion, there’s more to the story. Let’s untangle the deal and determine what exactly each team acquired in the deal.
Click to expand...

hermie1985 said:
Fowler to the Angels
Click to expand...

I stay away for 1 day, and this? He was their best hitter against RH pitching, I believe. Also, worst defender. I wonder who they are in on? Can't just be the the current roster, can it?
#87
Feb 5, 2021

Illwinsagain said:
I stay away for 1 day, and this? He was their best hitter against RH pitching, I believe. Also, worst defender. I wonder who they are in on? Can't just be the the current roster, can it?
Click to expand...

It might be. They have 5 young players that need to prove they belong on the roster. They can't be kept in limbo forever. Either the front office believes in them or doesn't. It's time for the players to justify the trust that has been placed in them.
#88
Feb 5, 2021

H
hermie1985
We know what we have in Bader. Great defensive player roaming centerfield. Not a great hitter. Dylan Carlson will be every day starter in right. O’Neill, Thomas and Williams fighting for playing time. Maybe even a shot at CF. We have to find out.

MLB network guy even suggested Edman in the OF and Carp at second. I don’t want that.

DaChief4ever
Always hear the same mantra for Fowler.."...he was a great team mate and clubhouse guy"....He was also a mediocre player who sure didn't earn his keep. He had 4 years in STL, just never the player we expected.
#90
Feb 8, 2021

wpr
Yadi's back. Almost.
The Athlete

The St. Louis Cardinals are close to bringing back free-agent catcher Yadier Molina, a source told The Athletic's Ken Rosenthal on Monday.
Click to expand...

wpr said:
Yadi's back. Almost.
The Athlete
Click to expand...

Appears to be a 1-year $9 million deal 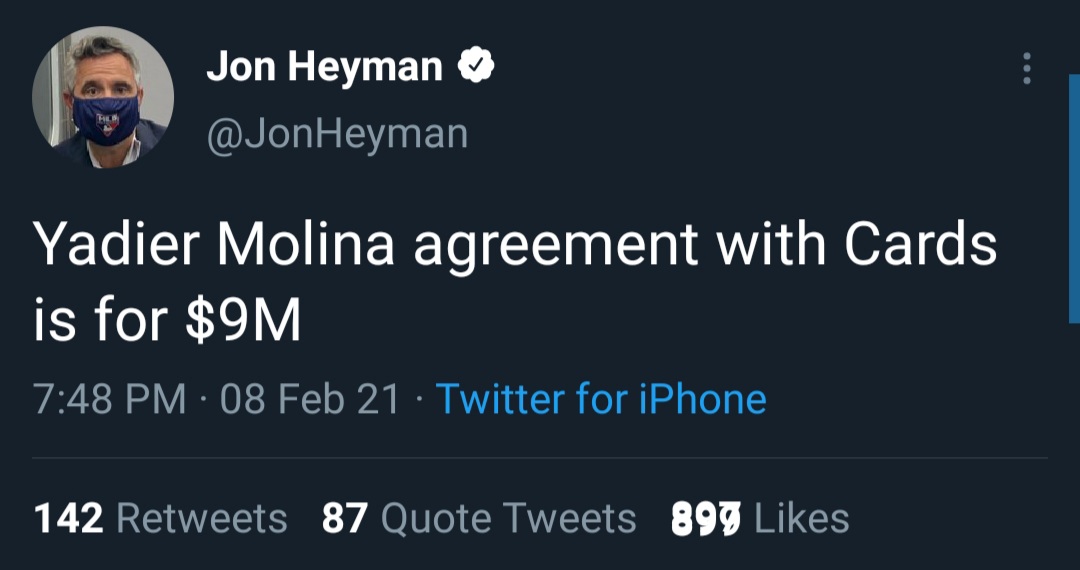 
What's next for the Cardinals?
Eno Sarris, senior MLB writer: The Cardinals still have some work to do around the edges. Another starter would help the pitching depth, and their right field situation is still in the bottom five in the league. The good news is that these things are decently available on the market. James Paxton or Matt Shoemaker could help the rotation depth. And a lefty-swinging outfielder like Brett Gardner or Josh Reddick could improve the right field.
Click to expand...

If these are the only choices I would be more interested in Paxton than Shoemaker. I wonder why he didn't include every fan's favorite, Ordozzi? As for the left handed OF, I am not overly excited about either. I'm not certain they will be a step up from the current quintet. If I must take one of these two, Reddick.
#93
Feb 8, 2021

IlliniFaninHoosierLand
MLB and players' association came to an agreement on health protocols for the upcoming season as well as the return of 7-inning doubleheaders and runners on 2nd in extras for another season.
#94
Feb 9, 2021

IlliniFaninHoosierLand said:
MLB and players' association came to an agreement on health protocols for the upcoming season as well as the return of 7-inning doubleheaders and runners on 2nd in extras for another season.
Click to expand...


If these are the only choices I would be more interested in Paxton than Shoemaker. I wonder why he didn't include every fan's favorite, Ordozzi? As for the left handed OF, I am not overly excited about either. I'm not certain they will be a step up from the current quintet. If I must take one of these two, Reddick.
Click to expand...

The Phillies announced Wednesday that they’ve traded right-hander Johan Quezada to the Cardinals in exchange for cash.
Quezada, 26, is a longtime Twins farmhand who inked a minor league deal with the Marlins last winter and went on to make his MLB debut late in the 2020 season. The righty tossed just three big league innings last year, showing a fastball that sat at 97 mph and has long been considered his best offering. He spent the bulk of the 2020 season at Miami’s alternate training site and landed with the Phillies on a waiver claim in late October.
Click to expand...

Quezada offers the team organizational depth in the bullpen with upside to contribute at the major-league level. He primarily throws his fastball – it touches 98 – with above-average sink that plays well off his slider. For the price, it was a deal the Cardinals could not pass up. He became expendable with the Phillies after the team signed reliever Brandon Kintzler and needed room on the 40-man roster for shortstop Didi Gregorius.

It is likely that the Cardinals continue to explore moves like this to help their organizational depth in the bullpen. After all, you can never have enough relievers – especially in a year where teams fear that pitcher injuries will increase given that the schedule is going from 60 to 162 games. But it is unlikely that the Cardinals make any big acquisitions to their pitching staff until midseason – the only exception is Jake Odorizzi, whose asking price exceeds what the team is willing to offer – and enter the season with the pitchers they have now and perhaps another arm or two on non-roster invites.
Click to expand...


The Cardinals’ stout bullpen, a top 10 unit in 2020, returns many of the same faces from last season, headlined by Andrew Miller, Giovanny Gallegos, Alex Reyes and Génesis Cabrera. Quezada could compete for one of the last open spots, but the club also has an open competition for the fifth-starter role that will have a trickle-down impact on the bullpen battle as well.

Quezada, who originally signed as an international free agent in 2012 with the Twins, signed with the Marlins in December 2019. He was claimed off waivers by the Phillies in October and tossed five innings (conceding two runs) this past Dominican Winter League season.
Click to expand...

IlliniFaninHoosierLand
MLB announced their Professional Development League, which will take the place of the minor league system, with the 120 clubs that will be license holders in the league: https://www.mlb.com/press-release/p...ernized-player-development-system-and-the-120

Here is the full list of teams that will be in the league: https://img.mlbstatic.com/mlb-images/image/upload/mlb/quiavqz8g3mjnxelmnmr.pdf

wpr
I'm glad Peoria is in the same division as South Bend. My cousin and I have gone to a few games in Peoria. He, being a C**s fan wants to go when South Bend is in town. They have been in opposite divisions in the past so they were only in Peoria once or twice a year. We'll have more choices as to which game to attend.
#100
Feb 12, 2021

Illwinsagain
Cards pick up a defensive catcher from the Mets for cash.